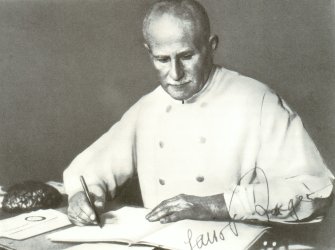 Because electroencephalography (EEG) forms the backbone of much of my neuroscientific research, during my first and second years of graduate school I studied a lot about the history and nature of EEG recording and EEG signals. This research is what lead me to Hans Berger, the inventor of EEG. There is an excellent historical treatment of Hans Berger by David Millett published in Perspectives in Biology and Medicine where a lot of this information comes from. But Berger's story is so interesting that I wanted to tell a little piece of it here.

Currently I'm interested in the role that neuronal oscillations play in cognition, so EEG tends to be my research method of choice when I do any neuroimaging. (For a more in-depth treatment of what the EEG signals mean, check out the Scholarpedia entry or my more brief explanation). My research involves work with normal, non-invasive (that is, not surgical) scalp EEG as well as invasive EEG (referred to variously as iEEG, ECoG, or ICE). (For an explanation as to why someone might get electrodes surgically implanted into their brains, check out this part of one of my talks).

What does all this have to do with Berger? Well that starts with why Berger was trying to record electrical signals from the brain at all. It turns out, Berger was a big believer in psychic phenomena: namely telepathy. He believed that there was an underlying physical basis for mental phenomena, and that these mental processes—being physical in nature—could be transmitted between people. Thus, in order to show that psychic phenomena exist, Berger sought to show the nature of the underlying physical processes of thoughts and emotions.

He initially studied blood flow and used it as an index to measure "P-energy" (psychic energy) associated with mentation and feelings. Of course, this being prior to the advent of neuroimaging, there was no way to actually measure cerebral blood flow from a person. So Berger made a leap. The brain receives so much blood from the heart (about 20% of the cardiac output), that the brain pulses with each heartbeat (you can check out a video of the human brain pulsing here). Parents with newborns might even be able to notice this phenomenon if they lightly touch the soft spot at the top of their baby's head.

After brain surgery, some patients still have large spots where parts of their skull are missing, and it was from these types of surgical openings that Berger first made his measurements of blood flow from the active human brain by measuring the pulsation pressure. These patients provided Berger with an opportunity to measure the brain's pulsations from a behaving person! Berger continued working with such patients and demonstrated that blood flow changes were associated with different mental states (fear vs. pleasure, for example), but he wanted to press further. Thus he began his experiments on the electrical nature of brain functioning, and in 1925 he recorded the first human EEG from a 17-year-old boy with electrodes placed over a large surgical skull defect:

...only when the two clay electrodes were placed 4 cm apart in the vicinity of a scar running vertically from above downwards through the middle of the enlarged trephine opening, was it possible with large magnifications to obtain continuous oscillations of the galvanometer string.


Very early on Berger noticed that there are fairly regular brain oscillations, such as the one seen below, in the human EEG (the top trace is the EEG, the bottom is a constant 10Hz timing signal).

These oscillations are very strong and can be seen in the ongoing EEG activity in many people quite clearly.

But what's cool about Berger's first EEG is how he was able to see any signal at all. The patient's surgical holes in the skull allowed Berger to get better signals because the skull wasn't in the way to affect his recordings. In fact, for several years Berger only recorded from such patients. Coming back to my work, qualitatively the EEG and iEEG signals are quite obviously different when a researcher compares them, but I became curious about quantifying these differences. That's where my hemicraniectomy study comes into play. As I wrote in my post about that paper:

Working with these patients gave us a unique opportunity as cognitive neuroscientists... One of the things about EEG is that you can't accurately locate where in the brain something is happening, but you can know when it happens with excellent accuracy. However, because these patients literally have a window onto the brain we can get a much better idea of where the signal we're recording is coming from.


One of my favorite anecdotes that my advisor told me when we first started this study was that when he was doing EEG in the 1970s on people who had previously had brain surgery, he noticed that the signals from any electrodes over the small holes in their skulls were abnormally large. So he would just move the electrodes off those sites to avoid this "artifact" (an observation that he says he's kicking himself for not taking advantage of 30 years sooner). Or, as Wired amusingly quoted him as saying, the signals, "looked really weird because they were freakishly strong".

So the only reason Berger saw the EEG signal in the first place was because he was working with the same patients he was trying to record brain pulsations from. And the only reason he was interested in these brain pulsations was to try and tie cerebral activity (blood flow) to mental states to show that thoughts have a physical basis. And the main reason he cared about that was to provide a theoretical framework through which psychic phenomena could operate!

Thus, I owe a good part of my career to Dr. Hans Berger and his unfailing effort to prove telepathy. And my work with people who had a surgical hemicraniectomy to better allow us to perform cognitive neuroscience and brain-computer interfacing experiments was published almost 100 years after Berger was recording from the very same types of patients! What an awesome scientific lineage to follow.
Written by Unknown at 09:17