The San Francisco Bay Area has long been a hub for the biotechnology industry, with several of the top-earning biotech companies headquartered in the greater Bay Area, including Genentech, Gilead Sciences, and Genencor.

Another major metropolitan hub for this industry is Cambridge, MA.

This shouldn't be a surprise to anyone paying attention given the fact that these two metropolitan regions are home to 5 of the top 20(ish) research universities: the Universities of California, Berkeley and San Francisco, and Stanford, for the Bay, and Harvard and MIT for Cambridge.

Education and research breed innovation, and the Bay area have these things in spades. It's not an accident that Silicon Valley, NASA's Ames Research Center, Lawrence Livermore National Laboratory, Google, Xerox PARC, and so many other centers for technological innovation are in the Bay. San Francisco and San Jose often atop US "smartest cities" lists. 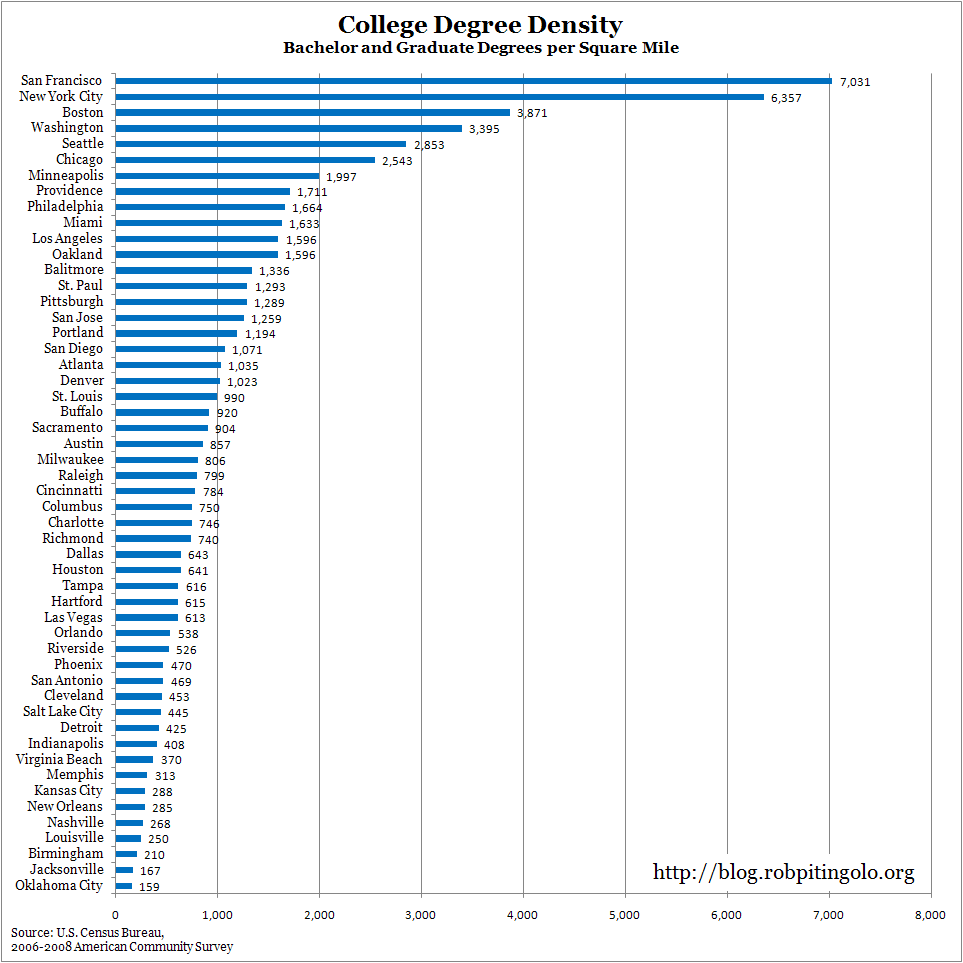 The whole vibe of the city is one that just begs you to be smarter, to innovate and join a research lab or start-up. Hell, go onto Twitter or Quora and look how many Bay Area folks refer to themselves as "entrepreneurs". Check out how many TEDx events are in the Bay Area:
Not to mention all the nerdy events to attend: Yuri's Night, Ask a Scientist, Nerd Nite, and so on. And, of course, Burning Man started here.

So here's my theory. It's well-known that the digital revolution of the 1960s was spurred on by government, private, and military money flowing into private and academic research in the area. This early success lead to a lot of industry/academia collaborations. As biotech and pharmaceutical innovations began to flourish in the 1980s, Bay Area scientists who had long watched their tech colleagues run off to start companies began to do the same. Why not?

And while the 90s were officially the "Decade of the Brain", it's not been until recent years that technological advances in fields outside of neuroscience have given rise to possible market products.

Obviously new ideas are built upon old ones (see Gladwell's arguments as to why "simultaneous discoveries" are not so rare). To quote wikipedia:

Multiple simultaneous discovery is actually a surprisingly common phenomenon, perhaps largely explained by the idea that previous contributions (including the emergence of contradictions between existing theories, or unexpected empirical results) make a certain concept ready for discovery.

I believe neuroscience is experiencing a renaissance, and the emergence of several neuroscience-based start-ups is really a byproduct of that. There are so many neuroscience start-ups in the Bay right now, it's ridiculous. I feel perfectly comfortable in declaring that the San Francisco Bay Area is Neuroscience Start-up Central:
What are the new ideas that are driving this shift in neuroscientific thinking?

Well first, the negatives. Although the advances in understanding provided by brain imaging such as fMRI have been widely lauded by the media, I believe the plug-and-play nature of the majority of research studies using that method have hindered innovation. (See my previous post on "how to be a neuroscientist".) This is true not just for fMRI, but it's the most widely-used method in cognitive neuroscience. It's too easy to conduct a publishable study that is very weakly hypothesis-driven (if there's even a hypothesis tested at all!)

However, in the last 10 years or so, there's been an influx of computer scientists, physicists, mathematicians, philosophers, and other thinkers into neuroscience, which was a field previously dominated by psychologists (on the cognitive side) or microbiologists (on the cellular side). This mixing both across disciplines from researchers outside the field and within disciplines between cellular and cognitive neuroscientists provides a breeding ground for cool ideas.

Neuroscience is fairly unique among the sciences in that it pulls in from so many different disciplines. On a regular basis I draw upon my knowledge of: programming and data processing, signal processing, philosophy of mind (and science, of course), psychology, medicine (neurology and psychiatry), biochemistry, electromagnetics, cell biology, etc. Craziness.

I mean, think about the news reports your hear about neuroscience. They range from genetics to creating artificial brains! Hell, creating brainSCANr involved drawing upon a totally different skill-set than what most neuroscientists are used to. I wouldn't have made that site were I not surrounded by talented tech folks to support me, and my brilliant wife to actually make the damned thing. ;)

There's not another field like it. It's so exciting. And other scientists and innovators are starting to get excited about it to. People are just starting to realize the possibilities and, as more people get drawn into neuroscience, the advancements are only going to quicken.

The next 20 years are going to be amazing for neuroscience, and I'm glad to be starting my research career at the cusp of its renaissance.

(EDIT: My buddy Curtis sent me the link I was looking for to Paul Graham's essay about cities and ambition, which was the foundation for the beginning of this post here.)
Written by Unknown at 10:21