Why we don't need a brain

Last week I had someone on Quora tag me in their question, "When parts of the brain are removed during surgery, is it possible for the remaining brain tissue to expand into the available space?".

Yesterday I made an offer on twitter inviting people to ask me some neuroscience questions. Of the responses I got, two were related to the Quora question as well.


How plastic is a mature brain?


how many neurons can you lose before you (or someone else) notices?


Well, all three of these questions touch on a topic that is very near and dear to me (and, as it turns out, is also interesting to a lot of other people, given some unfortunate recent events).

All three of these questions are actually related, believe it or not. I'll try to answer all three by making appeals to three of the more interesting papers I've read.

Is your brain really necessary?

Lewin asks this question in a great, classic piece from Science written in 1980. In this article, Lewin profiles some findings by Professor John Lorber regarding his observations of patients with hydrocephalus. One such patient (CT scan above) was described as follows:

There's a young student at this university... who has an IQ of 126, has gained a first-class honors degree in mathematics, and is socially completely normal. And yet the boy has virtually no brain.


In fact, the boy had a brain only 4.5 cm thick. Judging from the CT above, that appears to be true at its widest. The rest of his "brain" was filled with cerebrospinal fluid.

To put this in perspective, at its largest parts, this boy's brain was still only half the size of a normal brain. Total volume appears to be well below that.

What does this tell us? First of all, I don't necessarily agree with Lorber's conclusions:

...[T]here must be a tremendous amount of redundancy or spare capacity in the brain, just as there is with kidney and liver... [T]he cortex probably is responsible for a great deal less than most people imagine.


That statement, on its surface, appears to be untrue given the plethora of findings from stroke patients. The lesion method provides critical information about brain functions.

However it's not just the where of the brain damage that's important, but also the how. Or even the when.

Granted, I think a lot of cognitive neuroscientists are pretty cortico-centric (which is part of the reason I conducted this experiment), but Lorber might be going a little too far in the other direction there.

As I said in my "how to be a neuroscientist" post, it's very important that we don't let our models and theories get obscured by actual clinical observations. You can have the most elegant theory in the world about how a brain region functions, but if someone with damage to that region doesn't show the predicted deficit, you need to change your theory.

Well, here we are, presented with a clear case of massive brain tissue loss having no appreciable behavioral effect. How can we reconcile Lorber's clear observations with previous research that shows that cortical damage can cause behavioral changes?

Well first, let's look at another case study, How Much Brain Is Really Necessary?. This report by Distelmaier and colleagues just blows me away. I love this paper. 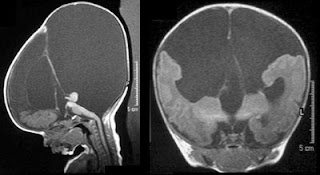 Here the authors describe the case of a young girl born with, among other disorders, hydrocephalus that caused a severely underdeveloped brain (see the MRI above). As the authors state:

Magnetic resonance imaging of the brain on the second day of life demonstrated severe Dandy-Walker malformation, hydrocephalus, bilateral schizencephaly, and dysgenesis of the corpus callosum.


So, shortly after birth, surgeons introduced a shunt to treat the hydrocephalus.

But how did she fare? 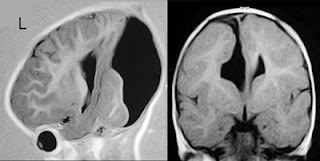 Follow-up magnetic resonance imaging at the age of 20 months demonstrated regression of hydrocephalus and considerable catch-up growth of cerebral as well as cerebellar hemispheres.


No kidding! What an understatement!

At 34 months the authors performed a followup neurodevelopmental examination of the girl. Although she had some developmental delay (particularly motor problems), she appeared to be socially and cognitively well off, especially considering where she started! Okay, so we've seen two cases where severe brain tissue loss leads to... well... not a whole lot. I've promised an explanation, but haven't given you one yet.

Here come Desmurget, Bonnetblanc, and Duffau to save the scientific day! These guys wrote a fantastic and insightful review, Contrasting acute and slow-growing lesions: a new door to brain plasticity. I rely on this review. It's critical to my hypotheses. I cite it a lot in my research. And I came across it at a critical time of confusion during my PhD. (Note to self: I really need to buys these guys a beer one of these days...)

Desmurget and pals were basically trying to reconcile some strange clinical observations: if a patient has a stroke to an "eloquent" part of the brain (basically neurosurgeon-speak for language or motor cortex), there are clear behavioral deficits. That is, damage to eloquent cortex causes speech problems or paralysis/hemiparesis.

Paradoxically, however, patients with low-grade gliomas (a type of brain cancer), could undergo surgical removal of large parts of brain tissue in the eloquent cortex without any noticeable behavioral consequences. 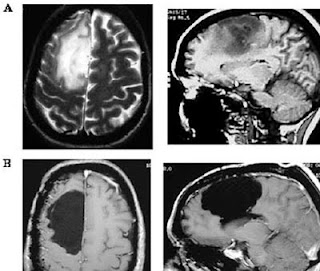 Desmurget, Bonnetblanc, and Duffau argue that this happens because of time. A stroke is effectively an instantaneous brain event. Blood supply to a brain area is cut off and brain cells die pretty quickly as a result.

A glioma, however, happens slowly, over the course of perhaps years. So much so that the amount of cancerous tissue in the brain can become enormous. (My PhD advisor, a neurologist, used to say that one of the best things that can happen to someone with a glioma is that the cancer causes a seizure early on, as this forces the person to visit a neurologist quickly, thus vastly increasing their chances of early detection of the cancer.)

The gliomas can take so long to grow, Desmurget argues, that the brain is able to slowly adapt and find ways of compensating for the brain cells that are damaged by the cancer. A stroke happens so quickly that this just doesn't have a chance to occur as well.

In the figure above, you can see that the patient had a massive resection of brain tissue, yet after about 1 month they had recovered. You just don't see that happen nearly as fast after stroke damage to a comparable brain area.

So to tie these findings all together, integrate them with my own research findings, and bring the topic back to the original questions asked, apparently you can lose a lot of brain tissue without ever really noticing.

As long as it happens slowly enough.

The findings by Larbor, Desmurget, myself, and others do suggest that the adult brain is plastic enough to compensate to an amazing extent at times.

And as Distelmaier showed, this compensation/recovery holds true for children as well. And in some cases of childhood hydrocephaly, the space where brain should be might even be filled back in with brain tissue!

So I guess the question still stands.

How much brain is really necessary?