That's me after my TEDxBerkeley last year. If I could do my talk again, it would be very different.

If it were tomorrow, I'd talk about how much more we could be doing in neuroscience if only some of the old walls were brought down. If only there was a way to bring together engineers, visual artists, designers, scientists, philosophers, mathematicians, etc. under one roof.

The mysteries of the brain aren't going to be solved with one, beautiful equation, or by a super-elegant experiment, or by a great new technique. The problem is bigger than that.

Understanding the brain isn't just a scientific problem, it's a data problem.

Granted there have been some amazing advances, but most cognitive neuroscience experiments are basically 1960s psychology experiments with better toys.

Right now, neuroscience in particular is undergoing a renaissance.

Hell, when you've got people like Sergey Brin who want to help spur on novel research, it strikes me as silly that a lot of the ways we're thinking about brain problems hasn't changed too drastically.

Neuroscience is fairly unique among the sciences in that it pulls in from so many different disciplines.

At Google last year, I gave a presentation titled, Computational Analysis Methods and Issues in Human Cognitive Neuroscience that was supposed to be about the difficulty we have in making the most out of the huge amounts of brain data that we collect from each of our subjects. We run very narrow experiments and throw out most of the information in our datasets by intentionally removing information via averaging, filtering, smoothing, a priori selection, etc.

Wasting data is stupid. But we all do it.

This winter, my wife and I put together brainSCANr in an attempt to synthesize and mine data from published research papers.

Tal Yarkoni and Russ Poldrack have done a more sophisticated job with PubBrain, which is a super cool, massive meta-analytic tool. Tal and Russ are doing an amazing job, but they're a rare breed.

My soon-to-be post-doc advisor, Adam Gazzaley, is doing awesome work in modernizing cognitive neurosciecne. At TEDxSanJose this year, he spoke about his work on taking neuroscience experiments out of the lab and into peoples' homes. About giving them at-home EEG and testing them using more natural stimuli (i.e., more "ethologically valid").

He and I have a really amazing project in the works.

The Bay Area is uniquely positioned at the interface of academic science and the intellectual tech communities. It would be the perfect place for a TEDbrain event.

The academic system around us is falling apart. Grant writing and politics make for a difficult environment for a researcher.

How is a scientist supposed to innovate when they're worried about their next grant? But I digress...
Written by Unknown at 16:11 6 comments: Links to this post

The 10 most cited neuroscience papers

Over on Quora someone asked, "What are the most-cited works in neuroscience?"

As some of you may know, I love literature mining. I started brainSCANr with my wife to look at how neuroscience research is conducted. I've been talking with Neuroskeptic about looking at biases in how different neuroscience topics are studied.

This question on Quora piqued my interest, so I decided to try and work out the answer. I had to do some digging.

A quick Google search showed that the Journal of Neuroscience also has a list of its most-cited papers on its site.

But in both of these cases we've got a clear bias: they only show the highly-cited articles published within their respective journals. And there are a lot of journals that publish neuroscience research.

Any answer I can find will come with a lot of caveats. It's difficult enough to define which papers are "neuroscience", let alone track down the "top cited" ones in an unbiased manner. From what I've seen, the most-cited papers tend to be methodological or crystallography structures. However, in order to reduce any sub-field bias, I wanted to find a database of papers to work from.

The ISI Web of Knowledge runs a site, ISI Highly Cited, wherein you can search by specific neuroscience researcher, but that information doesn't tell you about specific highly-cited papers. Cool, but no good here.

Thomson Reuters (who owns the Institute for Scientific Information (ISI)) also runs ProCite, which, thankfully, has a nice little site wherein they provide citation counts for 2610 neuroscience papers published in the ten-year period between 1995 and 2005. Those data come in a nicely-formatted text file.

These types of files are data pornography for me. They make what I do so easy and fun! 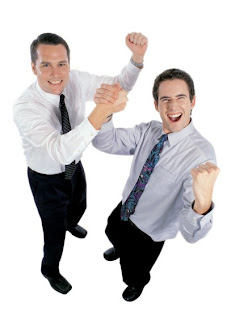 Mind you, the results from ProCite come with caveats: I can't say that they're comprehensive (I don't know how they defined "neuroscience") and they're temporally restricted (1995-2005). Never the less, it's a good start.

The breakdown by of the 20 journals with the largest number of highly-cited articles looks like this: 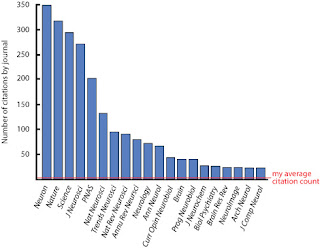 (Why yes, I do have a first-authored paper in three of those top five journals! I hadn't noticed! What? You'd like to give me a job? Why thank you! That would be delightful. ::COUGH::)

As an aside, I'd like to point out that 4 of the top 10 journals have one-word journal titles: Neuron, Nature, Science, and Neurology. Out of the 108 total journals represented, 22 have one-word titles. This means we should only see two--not four--one-word title journals in the top 10. This supports my pet theory that one-word title journals fare better than journals with longer titles. (This is a little ironic, because the journal with the longest title is also in the top 10: Proceedings of the National Academy of Sciences of the United States of America, but they've long since learned to refer to themselves simply as "PNAS".)

Of course, the earlier the year of the paper's publication, the more frequently it's been cited, which suggests that the citation counts for these articles will continue to increase (that is, after 10 years they still haven't really stopped getting cited). 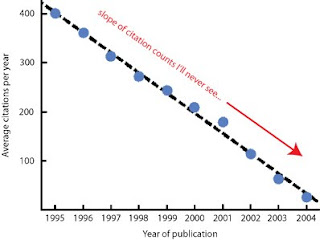 Without further ado, here are the 10 most highly-cited neuroscience articles published between 1995 and 2005, ordered by number of citations:

What's amazing to me is that 7 of the top ten papers are from Nature or Science, and 5 of them are more or less about Alzheimer's disease. This suggests a relative homogeneity of "top" researched topics.

As a final note, it's important to point out that these publications are from 1995-2005. They ignore older papers, as well as more recent ones. Given that the modern scientific publishing era began in 2003 with the founding of PloS and PLoS Biology, there wasn't really any time for papers published in those journals to really have any representation in this dataset.

How to be an anti-scientist

Along the lines of my "how to be a neuroscientist" post, I bring you: How to be an anti-scientist!


Since [the astronomer] cannot in any way attain to the true causes, he will adopt whatever suppositions enable the motions to be computed correctly from the principles of geometry for the future as well as for the past... these hypotheses need not be true nor even probable.


This textbook contains material on evolution. Evolution is a theory, not a fact, regarding the origin of living things. This material should be approached with an open mind, studied carefully and critically considered.

The top quote is a preface to Copernicus's On the Revolutions secretly prepended without Copernicus's knowledge by a Christian theologian in the 1540s.

The bottom quote is a preface to biology textbooks distributed in Atlanta public high schools in 2002.

That gives us a Δt of approximately 460 years across which the complexity of the anti-science argument has gone from:

"...[T]hese hypotheses need not be true nor even probable."


"[This scientific idea] is a theory, not a fact."

So, how does one succeed as an anti-scientist? Just keep repeating the same thing over and over again for centuries while the world around you changes ever faster.
Written by Unknown at 09:27 No comments: Links to this post