So my last post drew a lot of new readers.

Because there are so many new people here, I'd like to play a couple of games. The first I learned from Ed Yong:

1. Who are you?! Please leave a comment and tell me who you are and what your interest is in neuroscience (which is, I presume, why you're here). If you're a neuroscience student, tell me what you're studying!

The second is a game I first played on twitter a few months ago.

2. Ask me any neuro question and I'll try to answer it.

That one was fun, but it can take a while, since I try to support my answers with actual research. So bear with me!

For some reason my last post got passed around the internet a lot... with a strange phrase added to it in some places: "our senses would amaze us, if only we gave them our full attention, as animals do," which sounds a little... fluffy. I certainly didn't say that.

If you're expecting a blog by someone who would write something like that, I'm sorry to say you might be disappointed.

I tend to be a pretty hard skeptic. Especially so for neuroscience and my own work. Which isn't to say I don't sometimes do or say weird things. I just don't say weird things that sound like that.

Now I'd like to introduce myself a bit: I'm a neuroscience post-doc working at the University of California, Berkeley. In a few months I'm headed over to UCSF. This blog started as a way to write more openly about my own research and to share some of the analysis code I've written and projects I'm running.

For example, I run brainSCANr with my wife, Jessica Voytek, which is an experiment wherein we're quantifying connections between concepts in the neuroscience literature.

I'm also kinda known as the zombie neuroscience guy because of some of my public lecturing. But don't let that fool you. It's mainly a subversive way for me goof off while also trying to be more critical about neuroscience. This is a tough field, the problems we think about are difficult, and the media plays a strange role in feeding into some weird neuroscience myths.

To share some of my favorite posts, I'd like to point out "how to be a [critical] neuroscientist", which discusses how I do my first-pass read on cognitive neuroscience research, as well as "scientific acupuncture", which looks at media reporting on neuroscience. 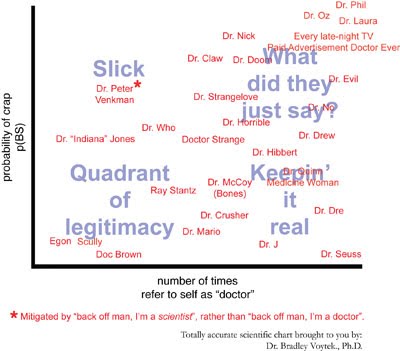 I'm also partial to neuroscience history, because there are so many amazingly weird people involved. Check out "Sir Henry Head's self experimentation" or "Brown-Séquard, spinal cord research, and sperm injections".

Finally, the vanity part. I do talk about my own research. But the biggest motivation isn't vainglory, I swear. I'm a huge believer in the idea that, if I can't explain my research in a simple manner, it's because I don't actually know what I'm talking about. It's very easy to trick myself into believing that my over-education has taught me something, only to find that when I try to explain an idea simply all I'm actually doing is parroting back phrases that don't really mean anything.

So to avoid boring all my friends at the pub all the time, I use this blog to work out ideas. Here are my research posts: