Just a quick note: I'm up in Quebec City for the 17th annual Organization for Human Brain Mapping conference (OHBM, or just "HBM"). This is my first time at this conference, since it's usually considered to be an (f)MRI conference, which isn't really my thing.

I'm much more of an EEG/ECoG researcher (see my PNAS, Neuron, Frontiers in Human Neuroscience, and Journal of Cognitive Neuroscience papers).

However, I'm here to present some of the latest work on brainSCANr.

Speaking of brainSCANr, Tal Yarkoni just released the public beta version of his neuroimaging meta-analytics tool, neurosynth just in time for OHBM! It's an amazing piece of technology recently published in Nature Methods, so you should check it out.

Also, this conference is my wife Jessica's first publication at a scientific meeting, so please everyone give her a round of applause! She did all of the system design, visualization, etc. for brainSCANr.

We've delayed the paper to work on what I'm calling "semi-automated hypothesis generation". We've also been working on integrating our findings with gene expression data from the Allen Brain Atlas (ABA).

So I spilled the beans on Quora last week about what we've been up to on brainSCANr. Someone asked a series of brainSCANr questions that I answered. It was pretty cool to see then on there actually. I was pleased!

* How are brainSCANr and the Allen Brain Atlas similar; how are they different?
* What discoveries or insights have come out of brainSCANr?
* What data analysis and visualization technologies underlie brainSCANr?

In one of my responses on Quora, I explain the hypothesis generation method a bit: 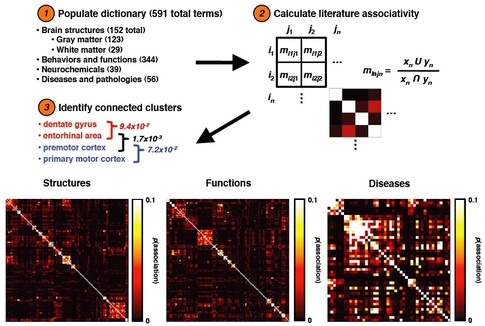 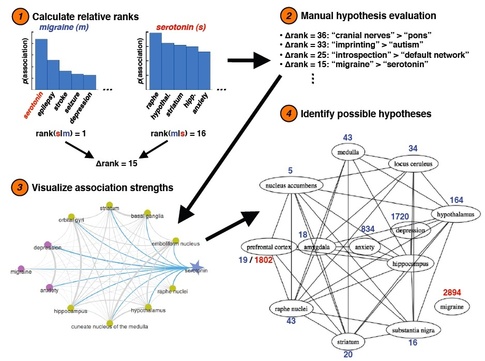 Note this is preliminary, but the idea is to find associations that are disproportionally ranked to find possible missing research associations. In the example above, for instance, "migraine" is most strongly associated with "serotonin", but "serotonin" is relatively weakly associated with "migraine" compared to how much more strongly it's associated with other terms such as the raphe nuclei, anxiety, etc. By using this calculation metric, we are attempting to find "holes" in the scientific literature, and trying to infer possible new or under-studied paths of research.


I also explain the integration with the ABA: 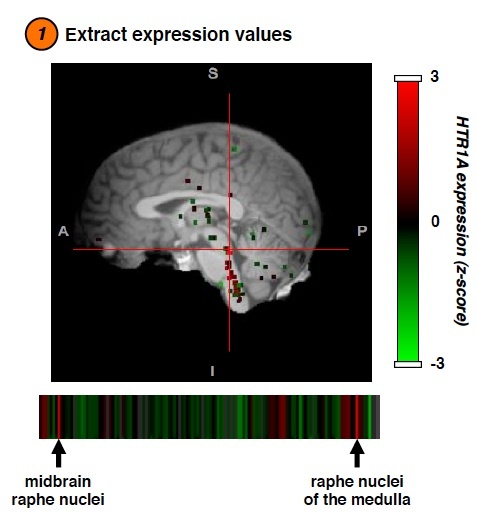 In the image above, you can see the actual gene expression profile for a serotonin receptor gene (HTR1A). As expected, this gene has a very high expression profile in the raphe nuclei, which brainSCANr tells us is the brain region most strongly associated with serotonin.

In fact, at the time of this writing, the zona incerta has two orders of magnitude fewer co-papers with serotonin than do the raphe nuclei (42 papers versus 4482).

This suggests that there is an overemphasis in the literature on the raphe nuclei and serotonin, and a serious dearth of information about the zona incerta.

We believe the combined information between the ABA and brainSCANr will offer some exciting insights.


Anyway, if you're at the conference, come drop by my poster on Wednesday or Thursday. I'll be in front of the poster from 10:30am onward Thursday morning, but sadly, due to the fact that she's 30-something weeks pregnant, my wife couldn't make the fight out to present with me.

This post is getting long, so I'll cut short my thoughts on Quebec and just post a few pictures and a video. The video is from the amazing (and free!) Cirque du Soleil show, Les Chemins Invisibles. This show is performed outside under a highway overpas for free during the summer in Quebec City. Incredible.

My plane from Montreal to Quebec was super tiny. May have been the smallest plane I've been on:

The conference has a cool art section that I'm really happy to see:

And the old city itself is very cool... feels very Victorian European:

But the street art reminds you that you're not living in 1850:

Thankfully, I've found a nice place to spend my evenings: