My Scientific American post: "What bats, bombs, and sharks taught us about hearing"

A few weeks ago I was asked by the man himself, Bora Zivkovic of the Scientific American blog, if I wanted to write a guest post.

There was one I'd been wanting to write for a while but hadn't gotten around to because of the amount of work that it would require. Well I finally got around to it, and it's posted over on SciAm. It's the most proper "news article-like" thing I've written.

Please give it a read!


What bats, bombs, and sharks taught us about hearing 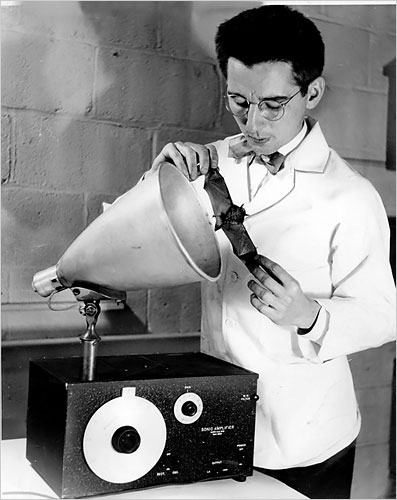 The post is about my great-grand advisor, Robert Galambos, the man who discovered, among several other cool things, that bats use echolocation to navigate. I also uploaded a video of his original echolocation experiments from 1940:

I had to edit out a few pieces of the video from the original Galambos version, but I honestly didn't cut anything critical. I left in all of his narration. The only parts I cut were the repetitions showing the bats flying normally, bats flying awkwardly, etc. He had several extra minutes of these segments to help demonstrate his point.

As for my article, I'd appreciate it if you all would read the whole thing, mainly because I'd love to get your feedback and thoughts on it!

Here's one of my favorite excerpts:

What impressed me the most about Galambos though wasn't his superb research, but rather the extent to which he'd sacrifice himself for his pursuit of knowledge.

I'm fascinated by the history of self-experimentation in neuroscience and medicine and have written about the topic previously. Sir Henry Head severed nerves in his own arm to document how sensation is regained after nerve damage. The history of endocrinology can be traced back to Dr. Brown-Séquard injecting himself with dog sperm to study its effect on his vitality and vigor...

In another experiment, conducted in response to the bombing of Pearl Harbor in 1942, Galambos and hearing researcher Hallowell "Hal" Davis were asked to "find out how much and what kind of sound it takes to injure or incapacitate a man."

How did they test this? Galambos explains:

we proceeded to expose our ears to the sound waves emitted by a so-called bullhorn, the kind of loudspeaker the Navy used to deliver messages to personnel wearing earplugs on the busy flight deck of an aircraft carrier. We systematically varied the three sound variables--intensity, frequency, and duration--producing in ourselves increasingly larger temporary hearing losses, until we neared combinations we thought might cause a permanent loss. At the end of the project, Hal decided to find out if our predictions were correct, and told us to expose his right ear--we always protected his left ear--to a wideband noise at 130 dB for 32 minutes. As predicted, this exposure permanently sliced a few hundred Hz off the high end of his existing congenital hearing loss in the 3500-3800 Hz region.

They partially deafened themselves. For science!

I'm excited about this piece, but it was a lot of work, so I don't think I'll be writing these kinds of pieces often.

I've got too much science to do!
Written by Unknown at 08:43