Why Netflixs' price hike is a brilliant move

Why Netflixs' price hike is a brilliant move

Yesterday I--and millions of other Netflix customers--received an email similar to the one below: 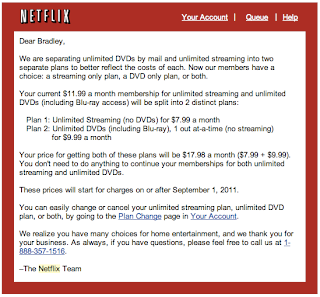 This email states clearly that beginning 2011 Sep 1 Netflix will not longer have a DVD/streaming bundle, but rather begin charging separate fees for each service. Now, most people interpreted this as a major price hike and a "bonehead" move on the part of Netflix.

Here, I argue that not only was this a brilliant move on Netflix's part, but that ultimately that it will be better for all of us, their customers, leading to MORE streaming content.

In fact, if I worked for Netflix, I would have advised this move 12-24 months ago. I'm surprised they waited this long. (My science and analytics consulting fees are steep.)

The only ones who should be worried about this are the USPS.

You see, according to Netflix CEO Reed Hastings over on Quora, Netflix spends $500M - $600M per year on postage. This is a huge cost of doing business, and this is what I'm sure is driving this decision.

What follows is what I believe to be the most likely process that lead Netflix to this decision. I will make several assumptions, but if I were involved in Netflix these assumptions would have been corroborated by exact metrics and market testing. This will be back-of-the-envelope math, but I could easily run some simulations to show that for any given range of realistic values for each of my assumed variables this is still a good move.

First, assume a spherical cow that this move will cause several customers to abandon Netflix altogether out of some consumer rage . Let's assume 10%. This will roughly equal a loss in revenue equal to the average revenue per user times 10% of total users.

Next, there will be some proportion of users with streaming who will bite the bullet and pay the extra $10/month for a DVD. Let's assume this is much less than the proportion of users who leave, so that we go in with a "more worse" scenario. This seems more likely to me and, in fact, this won't drive

Finally, there will be many users with streaming who will say "F you Netflix I'm not paying an extra $10/month for one DVD!" (See Louis CK video)

This again represents a potentially huge loss in revenue. But it's a much BETTER gain for Netflix in that they don't have to pay all that damned postage!

Let's say that the difference between the proportion of users who pay the extra $10 for the DVD and those who leave represents a $100 MILLION annual loss in revenue. On the surface, this looks awful. (And I'm sure it can't possibly be even this much, but we're going worst-case here).

But then let's say that a massive proportion of users (smartly) drop the DVD option and move over to streaming-only, which is what I'm sure Netflix wants. Let's say 75% of users are reasonable and choose this option.

This means that cost of postage for Netflix drops to only $125-$150M per year. This represents a SAVINGS of at least $375M annually. Removing the $100M/year lost revenue from users who cancel, this still nets Netflix $275M annually.

Now Netflix could rest happily and stash this $275M/year. But what I guarantee they will do instead is use that huge amount of in-pocket savings to leverage distributors to allow them to stream more content.

And extra couple hundred million a year can go a looooooong way.

So yes, on the surface, this move seems to suck for us, the consumers. The streaming content sucks. It's spotty. But in the LONG RUN Netflix will be in a much better position to afford to stream more content.

Which is really what all of us want.
Written by Unknown at 12:05