Self-stimulating the brain for heterosexual sex with a prostitute. Seriously.

Deep brain stimulation is such a cool, successful, amazing piece of technology, that I was excited to read a little more about its historical roots. But man. I don't even know what to say now.

I've written about a lot of crazy neuroscience stuff on this blog over the last 20 months:

But this... is the weirdest, most shocking research I've read, bar none. Literally, the litany of crazy shit in this paper is so long that by the end my reading, my notes in the margin devolved to this: 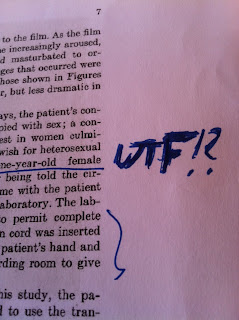 A while back, someone pointed me to a paper from 1972 by Dr. Robert G. Heath titled "Pleasure and brain activity in man: Deep and surface electroencephalograms during orgasm".

"How fun," I thought to myself, so very, very naively. "This will be a nice complement to my post about EEG and orgasms." (I'm quite proud to say these are the flavor of thoughts that I have.)

Instead, I got this unethical marvel.

The first thing I noticed was that 15 out of the 18 works cited in this manuscript are self-citations. That is, 83% of the previous research that this paper was built upon was written by the author himself.

To give a little background, this paper was written by Robert G. Heath. I didn't really know anything about this guy, but he was notable enough to have received an obituary in the New York Times. According to that (short) article:

In 1957, Dr. Heath found a protein antibody called taraxein in the blood of schizophrenics that was capable of inducing schizophrenic-like symptoms in monkeys and healthy human volunteers.

The finding was controversial because it was early evidence that schizophrenia is of biochemical origin and not, as was widely believed at the time, related to childhood or other emotional traumas.


Ok, fine. That's nice. But what's weird--and what the New York Times obit doesn't say--is that the taraxein theory of "schizogenesis" appears to be total crap, despite the fact that Heath held fast to his claims. Furthermore, the ethics of this research are questionable, at best. As Professor Alan Baumeister wrote in his historical analysis "The Search for an Endogenous Schizogen: The Strange Case of Taraxein":

On May 3, 1956... Heath announced that he and colleagues "had induced full symptoms of schizophrenia" in two nonpsychotic prisoner-volunteers... by injecting them with an extract from blood of schizophrenic patients.

(All emphases in this post's quotations are mine.)

If you've ever done research, or have any sense of ethics, the thought of using prisoners in an experiment to see if you can induce psychosis should set off your humanity-alarms.

What's more, according to Wikipedia (the arbiter of all Truth, I know):

Heath founded the Department of Psychiatry and Neurology at Tulane University, New Orleans, in 1949 and remained its Chairman until 1980. He performed many experiments there... [and] was partially financed by the CIA and the US military. One of his collaborators... later reminisced that they had used African Americans as subjects "because they were everywhere and cheap experimental animals".


You stay classy, history of psychiatry.

You'll note that all these things I've talked about so far? Nothing to do with the paper I intend to discuss. All this stuff? This is just flavor text to set the stage for the really unethical stuff.

Needless to say, Heath and his research will likely be the topic of several posts here.

So, back to orgasms and prostitutes. I'm not even going to bother trying to explain the scientific aspects of this paper. The hypothesis, methods, results... none of it matter because they're just completely overshadowed by every crazy part about this research.

I'm just going to quote huge swaths of this paper and let you all say, "WHAT THE HELL!!?"


Okay, that's kind of weird on its own, but hey, the research could be very interesting. I mean, the patient had electrodes implanted under his skull. This is usually done to determine where exactly in the brain the source of seizure activity is. This method is still used, and working with these patients is a major component of my research.

And sex research is fascinating! So if you've got someone in this situation, and they agree without any kind of coercion, then why not?

Wait, what's that Dr. Heath? This patient is homosexual? Oh...

Well please, tell us more about the patient and your experiments.

This man... had a 5-year history of overt homosexuality and a 3-year history of drug abuse. He was considered a chronic suicidal risk... and had made several abortive suicidal attempts... One month of military service... was terminated by medical discharge because of "homosexual tendencies"... The patient's experimentation with drugs began... with ingestion of vanilla extract. He became habituated to amphetamines, and he had used a variety of other sedative and hallucinogenic chemicals (marijuana regularly, nutmeg frequently, d-LSD sporadically, as well as inhalants, such as glues, paints, and thinners, and sedatives).


This is to set the stage. This patient has severe epilepsy, is a drug addict, and is extremely depressed.

So what does Heath do next?

...the patient was equipped with a three-button self-stimulating transistorized device... The three buttons... were attached to electrodes in the various deep [brain] sites, and the patient was free to stimulate any of these three sites as he chose... He was permitted to wear the device for 3 hours at a time: on one occasion he stimulated his septal region 1,200 times, on another occasion 1,500 times, and on a third occasion 900 times. He protested each time the unit was taken from him, pleading to self-stimulate just a few more times... the patient reported feelings of pleasure, alertness, and warmth (goodwill); he had feelings of sexual arousal and described a compulsion to masturbate.


For those of you who don't know, this type of behavior was seen in rats in the original brain stimulation and reward experiments by Olds and Milner. Rats self-stimulated sometimes to the point of death.

Seems like a perfect situation for a heavy drug addict, right? Just let him stimulate the "reward" and "pleasure" parts of his brain for hours on end!

One aspect of the total treatment program for this patient was to explore the possibility of altering his sexual orientation through electrical stimulation of pleasure sites of the brain. As indicated in the history, his interests, contacts, and fantasies were exclusively homosexual; heterosexual activities were repugnant to him.


He's gay. Very clearly gay. And his brain is getting forcibly stimulated such that he's experience strong sensations of sexual pleasure.

A twenty-one-year-old female prostitute agreed, after being told the circumstances, to spend time with the patient in a specially prepared laboratory.


A "specially prepared laboratory"? Nice. Did the doc light some candles?

And where did they get the prostitute? How did that conversation go?

Scene: 1970s, late night; car rolls up to young woman standing under a streetlight; window rolls down as car approaches

Can you imagine writing this into your IRB proposal? I mean. What?

And I love the matter-of-factness about describing how this all played out:

The laboratory was modified to permit complete privacy, and an extension cord was inserted between the plugs in the patient's hand and the jack box to the recording room to give him adequate mobility.

Later, the patient began active participation and achieved successful penetration, which culminated in a highly satisfactory orgiastic response, despite the milieu and the encumbrances of the lead wires to the electrodes.


To recap: this study involved taking a severely depressed, drug addicted, gay man into the hospital, letting him stimulate his own brain, and then tracking down a prostitute to have sex with him.

This is the most boggling, unethical, and offensive piece of "research" I've ever come across. I can't imagine what the rest of the papers by this guy are like.

If anyone has seen anything in the peer-review literature that's worse, I'd like to hear about it.