This is part six of our multi-day series on The Zombie Brain.

Be sure to visit The Cognitive Axon tomorrow for symptom 6!

So what exactly did we do to piss off the living dead? Oh sure, you probably had a grudge or two with someone who's risen from the grave, but most of the walkers coming after you have no idea who you are.

Zombies are just plain delusional; they see us as something else, something they can't make sense of. While modern neuroscience is still just beginning to understand the neural underpinnings of delusional disorders, this particular type of self/other association delusion has been linked at least two distinct circuits in the brain.

First, the inability for a zombie to recognize that they're chowing down on their bowling partner mirrors a very rare neurological disorder called the Capgras delusion.

Individuals with Capgras are convinced that the people they know well (e.g., a close friend or spouse) have been replaced by an imposter. It's like an alien came down and replaced your teammate with a lookalike that wasn't him. Think Invasion of the Body Snatchers.

Now we don't know precisely what causes the Capgras delusion, but let's suffice it to say that the zombie brain most likely has it! One hypothesis is that the brain regions that recognize faces (the fusiform face area) and the regions that assign emotional content to experience (the amygdala), which are normally communicating nicely, are somehow disrupted.

You can see Ramachandran talk about it on this TED video:

This means that people with Capgras can still recognize people as people but that they don't have any emotional ties to them. Couple that with the orbitofrontal aggression and control issues we described earlier, and you could see how this would get out of hand!

Therefore, the zombie is after you not only because they're pissed off and looking for a food source, but because they literally don't recognize you as the person they once loved.

Second, this ability to recognize "self" from "other" may also reflected in a set of frontal and parietal neurons called mirror neurons. These cells turn on when you perform an action (say picking up an ax) and when you see someone else perform the same action.

Some scientists believe that mirror neurons play an intimate role in social bonding and empathy; both behaviors that zombies clearly lack. Now, some have said that zombies completely lack mirror neurons altogether. However, that doesn't seem reasonable since zombies tend to imitate what they see (particularly things other zombies do). 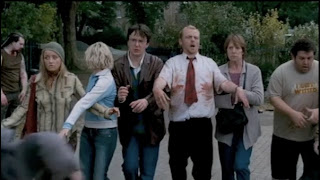 Likely, the response properties of these cells have changed. If you were to stick an electrode in a zombie's inferior frontal cortex, you’d likely observe mirror neurons that only respond when a zombie performs an action or sees another zombie performing the same action.

Both brain dysfunctions point out one key survival skill: if you want a zombie to not come after you... start acting like a zombie. They'll think you’re one of them and might even follow you into a well-devised trap. This demonstrates that, by understanding the neural basis of the zombie disorder, we can begin building protocols that will maximize our survival.
Written by Unknown at 09:00