Is the female brain innately inferior?

Did the title get your attention? It sure as hell caught mine when USC grad student Rohan Aurora sent me the link.

Recently Stanford's Clayman Institute for Gender Research published an interview with a Stanford neuroscientist about male vs. female brains.

I'm not going to lie: when I clicked the link I was expecting the usual attention-grabbing, rabble-rousing crap I've come to expect when I see a headline like that. 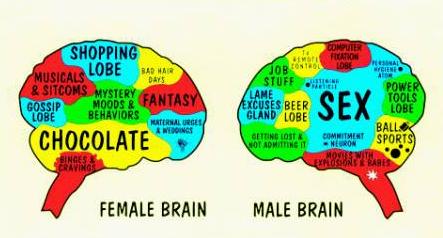 I was prepared for some serious eye rolling and frustrated groaning in response to the inevitable logical errors, overreaching conclusions, and other neuro-nonsense. Especially given how much gender has been on my mind lately (what with my recent foray into fatherhood and the whole #womanspace thing).

This certainly wouldn't have been the first time a neuroscientist has railed against silly neuroscientific claims in gender research.

Instead I got a well thought out, sane, clear-headed, and scientifically sound interview. I was especially pleased because the neuroscientist in question is a friend, colleague, and collaborator of mine: Prof. Josef Parvizi (co-author on one of my most-cited first-author papers). I'm especially proud to call him a collaborator after reading this. Seriously, this is a great interview and Josef just nails it.

The whole piece is short, but concise, and a great reference to counter some of the more common neuro-gender crap. They tackle three myths; I've quoted my favorite parts below.


...if absolute brain size were all that mattered, whales and elephants, both of which have much larger brains than humans, would outwit men and women.


Gender Brain Myth #2: Women and men have different brains due to estrogen and testosterone


...if estrogen and testosterone did shape the brain in different ways, it is an unsubstantiated, logical leap to conclude that such differences cause, "...men to occupy top academic positions in the sciences and engineering or top positions of political or social power, while women are hopelessly ill-equipped for such offices."


According to Parvizi, this logic is flawed: "Differences seen in cognitive tests do not necessarily provide direct evidence that those differences are in fact innate."


Finally, I love the following. It should be copy-and-pasted into any online argument. Or shouted repeatedly at any TV/magazine puff-piece writer.

"...if we are to entertain the idea that humans 'experience' life differently, and that different experiences mold the brain function differently, then we must also seriously consider that gender (along with class, ethnicity, age, and many other factors) would also contribute to this experience, and that they will contribute to molding of the brain...

For instance, if girls are expected to be more adept at language, and are placed in more situations that require communication with others, it follows that the networks of the brain associated with language could become more efficient in women. Conversely, if boys receive more toy trucks and Lego's, are given greater encouragement in math and engineering classes, and eventually take more STEM (science, technology, engineering and math) courses, it follows that the sections of the brain associated with mathematics could become more efficient in men...

The tricky part is that we do not make the mistake of taking account of these differences as evidence for biological determinism."