A Time article that literally makes my brain lobes explode

Time has just published the most frustratingly annoying piece of neurobabble I've come across (thanks for pointing me to it Avgusta!).

What I'm about to say is hard for me, because I love Time; they've twice named me their person of the year, and I hate to bite the hand that feeds me.

But forget it... that New York Times piece that I was annoyed about from this weekend has got nothing on this one.

It's a "very timely piece" about John Edwards. Is Time confused? They do know the American media is only supposed to talk about Republican presidential candidates right now, right?

Anyway, the very first sentence of the article sets the scientific tone.

John Edwards is the putrefied meat of the American political system — literally, as far as your brain is concerned.

Really? According to my brain Edwards is literally putrefied meat?

Allow me introduce you to grammar, as explained by the Oatmeal: 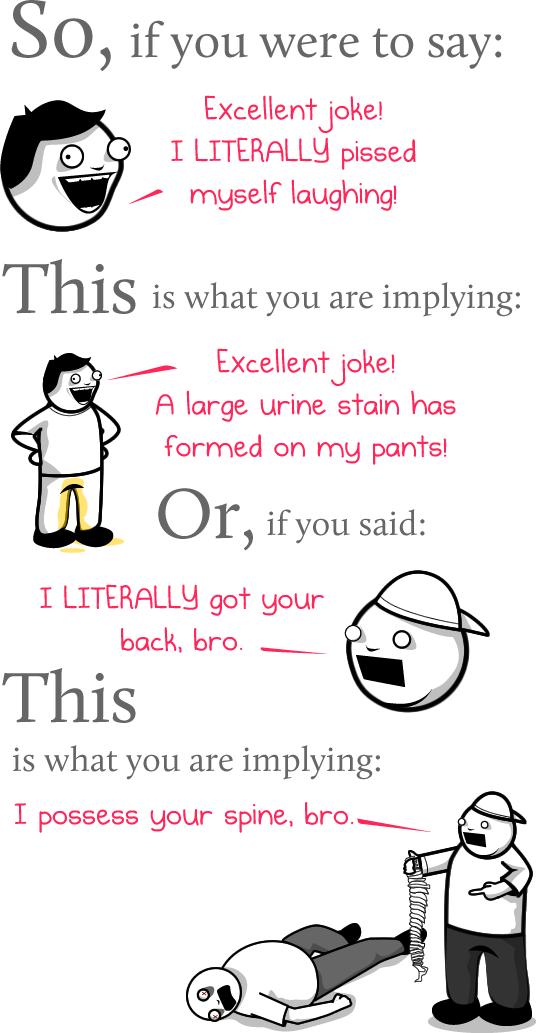 The article then goes on to say:

Think about Edwards for a moment — the perfect hair, the honey voice, the oleaginous smile. Your lip curled ever so slightly, didn't it? A teensy bit of bile may have risen in your throat. The lip curl is a threat display, the bile is an attempt to purge a toxin. Both were triggered at least partly by your prefrontal cortex and your temporal lobes — and both would have also occurred if you'd smelled a piece of food gone bad.

Okay, so the author asks me to think about Edwards and then tells me what my reaction should have been (my lip curled and bile rose in my throat? Has that ever happened to anyone ever?) and then tells me that my imaginary responses reflect some nonsense from my prefrontal cortex and temporal lobes (i.e., half my brain).

There's some blah blah requisite crap about fMRI, some terrible quotations from psychology faculty who are overstepping their research by talking about political outcomes, and then some amusing bits:

Paradoxically, the more his critics — to say nothing of his prosecutors — are seen to be piling on, the more our temporal lobes and prefrontal cortices may switch the valence once more, turning even a deeply loathed perpetrator into an unlikely victim.

Journalists, please take heed: don't do this kind of stuff. These bits about neuroscience add nothing to the story at all, and in fact the only reason they're in here is most likely to add an air of authority (as McCabe and Castel have demonstrated... see what I did there?).

The story would have been relatively fine if it had focused on the solid psychology research into how peoples' perceptions of attractiveness affects their decision making. Instead the author threw in some loose neurononsense that cheapened the piece.