Can you have sex so mind-blowing you can't remember it?

(Yet another post prompted by a question on Quora that got me thinking about some fun ideas. As always, caveat lector: this is just some more "science jazz"... playing around with ideas to get me thinking about things I normally wouldn't think about from a neuroscientific context.)

Okay, so there's a relatively more banal answer and then a much more fun answer.
Let's start with the more fun.
Totally Spitballing Fun Answer
Most people know about the studies in the 1950s with the rats where the rats had electrodes implanted in the "pleasure center" of their brains (the nucleus accumbens): 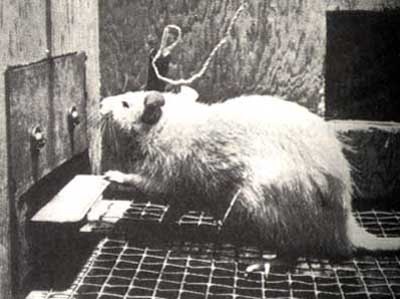 These rats would self-stimulate their brains at the expense of eating, drinking, and other life-maintenance activities. The only thing that seemed to matter to them was the pleasure induced by the electrical brain stimulation.
What most people don't know is that this experiment was (very unethically) repeated in humans in the 70s. In one case to try and "treat" a homosexual man for his homosexuality (full details in my post here).

This man... had a 5-year history of overt homosexuality and a 3-year history of drug abuse. He was considered a chronic suicidal risk... and had made several abortive suicidal attempts... One month of military service... was terminated by medical discharge because of "homosexual tendencies"... The patient's experimentation with drugs began... with ingestion of vanilla extract. He became habituated to amphetamines, and he had used a variety of other sedative and hallucinogenic chemicals (marijuana regularly, nutmeg frequently, d-LSD sporadically, as well as inhalants, such as glues, paints, and thinners, and sedatives).


...the patient was equipped with a three-button self-stimulating transistorized device... The three buttons... were attached to electrodes in the various deep [brain] sites, and the patient was free to stimulate any of these three sites as he chose... He was permitted to wear the device for 3 hours at a time: on one occasion he stimulated his septal region 1,200 times, on another occasion 1,500 times, and on a third occasion 900 times. He protested each time the unit was taken from him, pleading to self-stimulate just a few more times... the patient reported feelings of pleasure, alertness, and warmth (goodwill); he had feelings of sexual arousal and described a compulsion to masturbate.


One aspect of the total treatment program for this patient was to explore the possibility of altering his sexual orientation through electrical stimulation of pleasure sites of the brain. As indicated in the history, his interests, contacts, and fantasies were exclusively homosexual; heterosexual activities were repugnant to him.


A twenty-one-year-old female prostitute agreed, after being told the circumstances, to spend time with the patient in a specially prepared laboratory.

Now, imagine what we as a species would be like if we could remember sex. And I don't just mean "remember having had sex and some vague details about the experience", but remember everything about it.
Granted, there are people who can "think themselves off", but this is still a time-consuming, effortful process.
Would there be any impetus for us as a species to continually try to procreate if all we had to do to relive an orgasm was just "press" our own internal memory button? Would we do it like the rats (or the guy) with the brain implants? Over and over again?
We probably wouldn't last too long.
So here's my new hypothesis: the reason we (as a species) don't have perfect memory of experiences is because there would be little reason to continue having sex if we did!
Okay, maybe not...
So technically speaking, I would argue that we can't ever remember sex for a reason! We might be able to remember some details, but not everything.
Let's get to the more banal answers.
Banal Answers
It turns out that sometimes sex can induce retrograde amnesia. But this isn't restricted to just sex, but it makes for some cutesy news articles.
There are two main possible causes.
Any physically strenuous activity "activates" the sympathetic aspect of your autonomic nervous system--your "fight or flight" response. This causes increases in heart rate, blood pressure, sweating, etc.
This may sound familiar to the sexually active among you.
Aerobic exercise improves the elasticity of your blood vessels... the flipside of which means that if you're fairly sedentary your vessels are less elastic than they could be.
Well, if you're unlucky you may have a pre-existing condition such as an aneurysm or other malady that would cause a stroke, physical activity that increases heart rate and blood pressure may cause a rupture of a blood vessel in your brain. Especially if they're relatively inelastic.
Strokes can cause amnesia, including retrograde amnesia for recent events, so a stroke induced by physical activity (including sex) may cause you to not remember it.
Interestingly, another story on "mind-blowing sex" contains an interview with a neurologist who'd done research on what's known as "transient global amnesia", which does not have a clear cause.

The closest thing to an explanation researchers have for this sex-triggered amnesia is that the problem may not begin in the brain, but in the neck. In a January 2010 study published in the journal Stroke, Ameriso and his colleagues conducted sonograms of the necks of 142 patients who'd experienced transient global amnesia within the last week.


They found that 80 percent of the patients had what is called insufficiency of the valves in the jugular vein. This vein, which runs down the side of the neck, carries spent blood from the brain back to the heart. Valves in the veins prevent blood from flowing backward toward the head, but if the valves don't close sufficiently, blood could seep back upward.

So if sex caused a reduction in oxygenated blood available to the brain through this valve issue, it's certainly plausible that this would cause transient global amnesia... basically sex you couldn't remember.

Be sure to check out Mo Costandi's great write-up of this research over on the Guardian blogs, too!