This is a quick survey to see how people keep track of the newest developments in their fields. As an example, I use a mix of the following services:


I've been playing around with some services such as Mendeley and ResearchGate as well, but those haven't really been added to my common research discovery toolset yet.

So yeah, as the title says: how do you all stay up to date with the scientific literature? Please leave comments!
Written by Unknown at 12:51 14 comments:

In this post I'll discuss the science behind my most recent paper in PLoS ONE, "Prefrontal Cortex Lesions Impair Object-Spatial Integration", as well as give a general update of my goings-on.

It's been a while since I've posted here about my own peer-reviewed research and my personal goings on. I've had a publishing break; my most recent first-authored papers prior to this one were the three clustered back in October/November 2010:


But a lot was going on last year: new post-doc at UCSF, zombies, left and rejoined academia, new baby... so you'll forgive me, I hope, for having a small lapse in my publication record.

Despite that lapse, you should expect several more updates about my research in the next few months. In fact, just this week I got word that another paper of mine was accepted for publication, I've got a third sent back to reviewers after a positive round of reviews, and two more waiting for co-author approvals before sending them off for publication. All of these are first- or senior-authored papers.

Boom. Headshot. Bring it on, Science.

Back to the paper of interest.

So this project was another "kill two birds with on stone" kind of thing wherein my colleagues and co-authors wanted to examine the role of the prefrontal cortex in integrating information about object identity and spatial location. Or, as we said in our Introduction:

The ability to navigate a complex visual world relies upon knowing both what an object is and where it is located. This capacity makes the difference between recognizing the red brake light on the motorcycle right in front of you from the red stoplight far ahead. Distinct ventral “what” and dorsal “where” pathways support object identification and location, nevertheless we are capable of seamlessly integrating object form with location information in a unified percept.

Of course this what/where distinction may be overly simplistic, but the behavioral fact is that we do seamlessly integrate distinctly separate pieces of information and I find that fact fascinating. Even more, the means through which brain areas coordinate information transfer to perform this kind of integration is a central question in my research. A paper I've got coming out later this year tries to address that question from a neurophysiological perspective.

But I'm getting ahead of myself. Back to the paper at hand.

Once again we opted to work with a group of patients who each had a lesion in one half of their prefrontal cortices, as can be seen in this Figure demonstrating the percent lesion overlap across our subjects, by brain region:

To study object/spatial integration we used a simple task that required subjects to remember both an object's identity as well as its location in space:

The task goes like this: the subjects were presented with an object to remember, along with a grey square indicating a location to remember. Both the object and location always appear together in either the right or left half of the screen. We do this to take advantage of the basics of the mammalian visual system: information in our left visual field (the left side of the screen) is first processed by the right half of our visual cortex, and vice versa. Check out this intro video:


Here's the neat thing: we know that the frontal cortex communicates with the visual parts of the brain in the back. So our patients with lesions to their left frontal cortex should have deficits in object/spatial integration only when stimuli were presented to the right side of the screen. This is because when information is presented to the right side of the screen, it would normally enter the left visual cortex, and then get "sent up" to the prefrontal cortex which helps remember this information during a delay period when nothing is actually on the screen. But because of their specific damage to only one side of their prefrontal cortex, this deficit would only arise for stimuli shown on the right, and not on the left, for example.

This is what I found in my PNAS paper for normal working memory. But surprisingly, we didn't find this effect in the first round of piloting for this experiment. Sure, the patients make more errors and responded more slowly overall, but they weren't worse when the stimuli were presented to the damaged half of the brain:

Which got us thinking. In my Neuron paper I showed how the intact prefrontal cortex helps compensate for the damaged side when the damaged half of the brain is challenged. Maybe there's something about this task, or task design, or this specific group of subjects, that makes this compensation easier or better.

So here's the second bird with that one stone: we added some visual noise to our experiment. In the Neuron paper I argued that for compensation to occur, visual information must be transferred from the damaged half of the brain over to the undamaged half so the intact prefrontal cortex could process the task. This transfer probably happens across the corpus callosum back in the visual cortex.

If this hypothesis is true, if we could somehow block that transfer, or at least make it noisier, we should once again see the deficit.

Here's the basic model of this hypothesis:

Well, it turns out that this mask did have the hypothesized effect. By adding noise to the intact hemisphere specifically during the time when visual information should transfer from the damaged hemisphere, we were able to exacerbate the behavioral deficit:

Note that this wasn't a huge effect, and I actually ran some resampling statistics on the full dataset to try and confirm that was we found wasn't an artifact. Nevertheless, the box and whisker plot on the left above shows that it's a pretty consistent effect within the patient group, with 9 out of the 10 patients showed the effect, and one patient just barely did not.

More interesting is the fact that the patients with the biggest lesions showed the biggest effect. Correlations are always nice, right? They're sciencey. 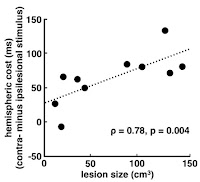 Okay, meta-science time for those of you out there just getting started out in the sciences: this paper was reviewed in a couple of "high profile" journals, but mainly because our hypothesized effect was weak it was rejected, despite some quite positive reviews. This was after a round of appeals because a reviewer at High Profile Journal actually referred to the d' metric we used to index "accuracy" as "opaque" and requested units on the associated axis in Figure 3 (d' is unitless).

No bueno for such a common metric.

This paper bounced around for years across 7 journals before we opted to work with PLoS ONE. I'm sorry I waited so long, because the experience there was great and the reviewers were thorough and conscientious.

As always, I'm keeping track in my CV of how many times each paper I publish was rejected. My rejection count is getting impressive! It's a nice exercise, not only because it lets new-comers to science see how arduous and difficult each victory is, but also because it makes a little game out of getting rejected!

The little things really do help with motivation sometimes.

This will probably be my last stroke/recovery paper as first-author for a while, as I'm moving on to other systems of neuroplasticity for my post-doc. But I really love working with these patients, and this is a topic really near to my heart, so I'll most likely return to this work some day.