(Edit 2012 July 30: Here we are six weeks later, and Mr. Lehrer has admitted to fabricating quotes and lying to a journalist about parts of his latest book. Obviously there is no defending this kind of behavior. This post was meant to illustrate some of the problems in neuroscientific thinking using a popular contemporary science writer. Sadly, it would appear I chose a poor horse to back on this one.)

This is a strange post for me to write because I admit I've ridden the anti-Jonah bandwagon before, advocating throwing Jonah overboard to quell the pop neuroscience storms. 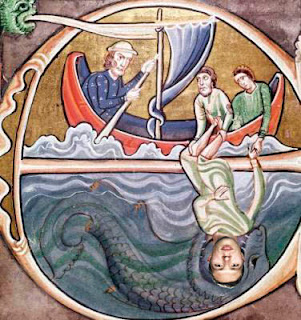 Upon honest introspective reflection I admit that some of my anti-Lehrerism probably stems from righteous brain-nerd ego-driven indignation. Why does this dude get all the attention when he's not even a neuroscientist?! He's just a neuroscience roadie!

And that's not fair, and neither is all the shit he's getting.

He's taken a lot of flak lately, more so than I think he deserves. He's not a neuroscientist. He's loose with language and exaggerates or adds flourish. He's glib and fetishizes neuroscience.

But you know what Mr. Lehrer? I've come to realize something:

I would be more annoyed if Mr. Lehrer were intentionally distorting neuroscientific research to fit his needs, but in reading his works I don't believe he is. Full disclosure time: I've never read a single word of his books. They're not written for me. But I've been reading his columns on Wired and The Wall Street Journal and other outlets for years now.

So why is the neuroscientific community at fault for Mr. Lehrer's occasionally inaccurate scientific reporting?

Because our own house is in such disarray. Of course there are the well known issues in cognitive neuroscience, such as Vul's "voodoo correlations", "double-dipping" statistics in neuroimaging, and the dead salmon. Or our straight-up misunderstanding of basic statistics.

But some of our issues are more subtle. One of the main offenders living in our attic seems to be conflating the idea that because a brain region is active in one state--such as addiction--and in another task--such as mothers looking at pictures of their own babies--that babies are "addicting".

Or your iPhone is.

This makes about as much sense as saying that because I kiss with the same mouth-hole that I burp from, kissing and burping are essentially the same. (Note: they're usually not.)

Of course, if this logical inference were true, so too should be its converse. Maybe addiction is like having babies? Shouldn't it cut both ways?

And that's assuming that the "dopamine = reward" hypothesis is even true. Most people--neuroscientists included--take this as gospel truth. Of course dopamine equals reward! Dopamine neurons fire in response to rewarding stimuli, and the neurons "learn" to predict the rewards! Addicts' brains show activity in dopaminergic regions when shown images of drug paraphernalia. And on and on.

But--and this is apocryphal as no one would ever publish this--but from what I've heard the neurons that best predict reward values aren't in the dopaminergic brain regions. They're in the monkeys' neck muscles. Because the monkeys tense up in anticipation of reward. But few scientists would say that the neck muscle neurons are "encoding" or "predicting" reward, yet we make that fallacy all the time when we imbue neurons with that special computational power.

Oh, and by the way, dopaminergic neurons don't get any sensory inputs early enough to make a "decision" about the reward value of visual stimuli. In fact, they're probably encoding salience (relevance). 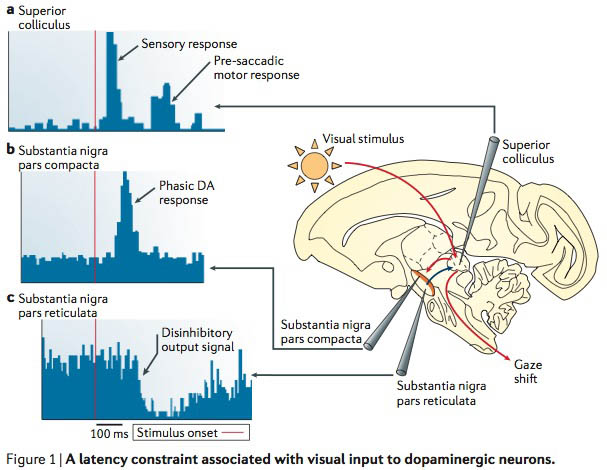 Which explains why drug users have increased activity when shown pictures of drug paraphernalia, and mothers pictures of their children, or even iPhone users pictures of iPhones versus Androids: because those things are more familiar and relevant to them.

To really hammer this point home, there is one disease we know of that is caused by the death of dopaminergic neurons: Parkinson's disease. It seems to me the clearest support for the argument that "dopamine = reward" would be seen in people missing most of their dopamine. Parkinson's patients shouldn't be able to experience any reward/pleasure because that whole system is obliterated.

Clinically, not feeling pleasure from experiences is known as "anhedonia", and a systematic review of the literature on Parkinson's and anhedonia in 2011 was inconclusive. In that review the authors found that, if anything, any signs of anhedonia in Parkinson's patients was likely caused by their associated depression.

This is very personal for me, as I watched someone very important in my life degenerate from Parkinson's disease. While an anecdote is not data, I can tell you he wasn't anhedonic. Instead he would just space out and stare all the time. Nothing seemed relevant to him.

It's not just popular writers who make these kinds of subtle scientific errors; we cognitive neuroscientists do it all the time as well.

It turns out some of our strongest neuroscientific results could very well be wrong. Or, at the very least, they're not nearly as cut and dry as they're often made out to be.

So how can we blame people like Mr. Lehrer for linking dopamine with reward when that idea has been one of the major results of systems and cognitive neuroscience of the last 30 years?

There is also the fallacy that poorly-defined (scientifically speaking) concepts such as "creativity" can be accurately studied neuroscientifically. How do you operationalize creativity, and more importantly how do you know that what you're seeing in the brain in response to your measure of creativity is the thing you think you're measuring? There's often no way to validate this.

When you ask something like "where is creativity in the brain" you assume that researchers can somehow isolate creativity from other emotions and behaviors in a lab and dissect it apart. This is very, very difficult, if not impossible. Neuroimaging (almost always) relies on the notion of cognitive subtraction, which is a way of comparing your behavior or emotion of interest (creativity) against some baseline state that is not creativity.

But if activity in that region increases as you're "more creative", clearly that's strong evidence for the relationship between that brain region and creativity, right?

Just like how when your arms swing faster when you run that means that your arms are "where running happens".

My point being, these errors are running amok in our own scientific house. Cognitive neuroscientists make these assumptions all the time.

Cognitive neuroscience grew out of experimental psychology, which has decades of amazing observations to link psychology and behavior. But with this legacy comes a lot of baggage. Experimental psychologists observed that we have the capacity for memory, attention, emotion, etc. and they sought to piece those phenomena apart.

With the advent of neuroimaging techniques, psychologists put people in brain scanners to see where in the brain behaviors "were".

But this is the wrong way of thinking about these concepts.

As cognitive neuroscientists, instead of asking, "where in the brain does this fuzzy concept occur?" we should be asking, "how can neurons give rise to behavioral phenomena that look like what we call creativity?"

Obviously I'm not saying that psychologists were doing things incorrectly. What I am saying is that we need to build upon what we've learned from decades of psychological research within a neuronal framework.

Not just stick people into an fMRI, press some buttons on a computer that say "analyze", and copy-and-paste the figures into a paper.

So Mr. Lehrer, keep up the interesting writing. Just... please be more skeptical of us. We don't know nearly as much as you give us credit for.