Yesterday I gave a talk at the Allen Institute for Brain Science (twitter) about my work on brainSCANr and how it integrates with their Allen Brain Atlas.

For those of you not familiar with the organization it was started by Paul Allen, co-founder of Microsoft. So far he's invested about $500,000,000 of his own money to allow the Institute to prosper. They've got several concurrent projects going on, namely looking at gene expression in the human and mouse brain, connections between regions, and so on.

They made a splash about 5 years ago with their Nature paper, "Genome-wide atlas of gene expression in the adult mouse brain" and then again in 2009 with their Nature Neuroscience paper, "An anatomic gene expression atlas of the adult mouse brain". It's my understanding they've got a huge new Nature paper coming out soon as well.

And they recently just hired consciousness neuroscience research extraordinaire Cristof Koch away from Caltech to be their Chief Science Office. Although shorter than we'd hoped, it was really nice to be able to sit and chat with him about my research and future directions.

Why are these papers so cool? Honestly it's mostly because of the amazing technology driving their massive data collection efforts. They've got an enormous facility with hundreds of scientists and automated robotic data collection systems just tearing through terabytes of data.

They were also really interested in my work with Uber... it was a pleasant surprise to meet a group of scientists who understood the importance of working with software engineers, data visualization people, and so on. 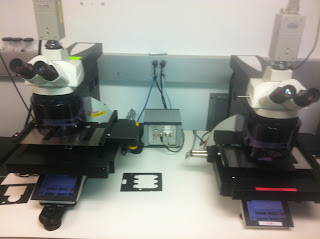 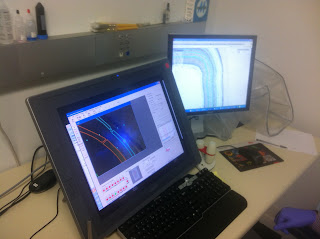 It's clear Paul Allen and the Institute have built a very data-driven, tech heavy team. Their goal is not only to collect all this data, but to share it with everyone.

These are my people.

Over dinner last night there was a lot of excited talk about the future of data in neuroscience. I've said it before--and it's nice to sit with a group of scientists who agree--that I think it's arrogant to believe that the person who knows what best to do with the data that I collect is me.

And that philosophy is built into the Institute.

Don't get me wrong, they are doing amazing things with their data internally, but they really do hope that researchers will take their data and run with it and do things they couldn't imagine (which is I guess why I was invited).

They've put together what is probably the most user-friendly neuroscience data site I've seen that allows researchers to explore and play with data.


I really believe these kinds of endeavors will be the future of neuroscience: data-focused and engineering-heavy with a huge scientific team running in parallel to take part in the data exploration and to guide hypothesis-driven research.

I can't wait to see more efforts like this start popping up in the next few decades.