Hot on the heels of the huge push this week about the NIH BRAIN project, Francis Collins, Director of the massive NIH, made an appearance on the always-awesome Colbert Report (which several friends pointed me to).

During the interview Collins has Colbert place an EEG cap on his head and shows off what's supposed to be Colbert's brain's electrical activity.

Except it's clearly not. At least, not really happening live anyway.

I know a thing or two about EEG and over the years I've personally collected EEG data from more than 100 people. I'm willing to give 5:1 odds on the data being shown being pre-recorded (probably not from Colbert).

This isn't a big deal. But I find it amusing because, remember, Collins is the head of an institute that doles out $30.9 billion each year in biomedical research funding and just announced with the White House a huge $100M project specifically geared toward understanding the brain.

And with all that money Collins still can't get good enough tech to do an honest real-time EEG demonstration.

Here's Colbert with the cap on: 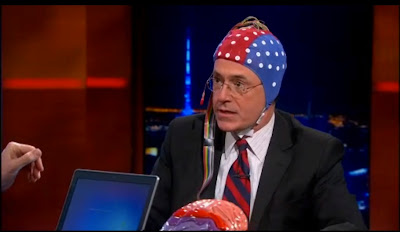 See that thing hanging by his eye? That's an external electrode used to record eye movements and to use as a signal reference. Not hooked up. So what's the signal being referenced to? Maybe another electrode? 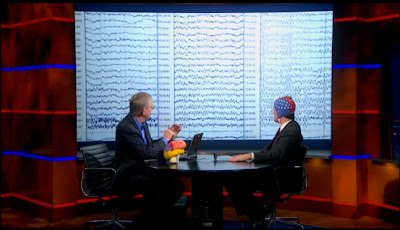 The big fluctuations behind Colbert's head are visual alpha (see here for a primer on alpha). The high-frequency activity behind Collins (in the lower left) is muscle artifact (probably frontal cortical); remember muscles work off electrical activity, too, and our face muscles are much closed to the EEG electrodes than the brain so muscle activity shows up as a huge artifact in EEG.

In the upper left you can see some lower frequency (maybe 2Hz?) shifts. While I can't see a time-scale, knowing that the activity behind Colbert is about a 10Hz oscillation (because that's what the visual cortex does) gives me a rough time scale. This low-frequency activity tells me the data aren't being filtered below at least 2Hx.

This all tells me several things:
Pretty wild what you can infer from a bunch of squiggles once you know what to look for, huh?
Written by Unknown at 19:36