How does my online presence impact my citations?

Someone over on Quora asked this question about me a while back; I think my readers here would appreciate the answer: "Has Bradley Voytek's online presence had an impact on his number of citations?"

Because n = 1 and time is unidirectional, there's no way for me to run an experiment to know the answer to this question. However based upon inferences and converging evidence I would weakly conclude that my "online presence" has probably resulted in an increase in my citation count.

As of right now I have about 17 peer-reviewed journal publications which have been moderately cited (about 300 total citations). My four "main" publications on which I was the primary author, for which I wrote lay-level blog posts about, that I shared on social media, and that were published at least two years ago have been cited a total of 109 times, for an average of 27.25 citations per article. According to an analysis by Times Higher Education on articles published from 2008-2010, on average in this two-year period a neuroscience article will be cited 8.09 times. On the surface this means my papers show a more than three-fold increase in citation rate than the average neuroscience article.

Keep in mind that citation rate is not normally distributed and has a heavy tail, and only about 50-70% of peer-reviewed papers are ever cited at all.

The second piece of evidence that suggests my online presence has improved my citation count is from an informal analysis I did at the journal level. This analysis shows that the number of Facebook page "likes" for a journal, as well as the number of twitter followers the journal has, correlates with the total number of citations the journal receives. Thus, while the causality can certainly be questioned here, one could infer that an individual with more twitter followers would also receive more citations. 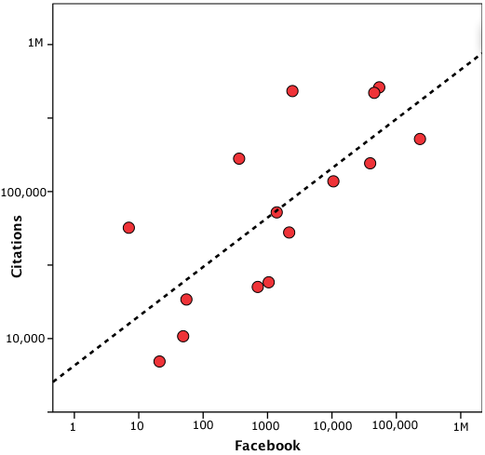 The final piece of evidence is from a recent paper by Jason Priem, Heather Piwowar, and Bradley Hemminger, "Altmetrics in the Wild: Using Social Media to Explore Scholarly Impact". Among many of the fascinating findings in this report is that article-level citation count correlates with "social reference saves" on sites such as Mendeley and CiteULike. 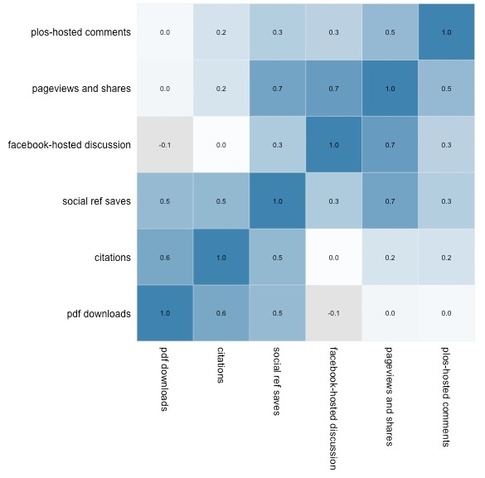 To reiterate, there is no experiment I can run on myself to truly know the answer to this question, but the data converge upon a weak suggestion that yes, my online presence has probably increased my citation count.
Written by Unknown at 09:36