This post might turn into a collaborative research project. If you're a data person, or an experimental psychologist interested in this, get in touch. I'd love to see if we can't formalize this idea.

Anyway, a recent (excellent) Radiolab episode about the strange, unproven ideas of Henry Heimlich (of Heimlich maneuver fame)--along with this Atlantic article about Linus Pauling's ideas about vitamin mega-dosing as a cancer cure--got me thinking about the "Nobel Disease" and the effect that early successes could have on people.

According to that link:

The Nobel disease is a term used to describe a phenomenon in which Nobel Prize-winning scientists endorse or perform "research" in pseudoscientific areas in their later years. In reality, this "disease" most likely demonstrates that even the most brilliant people are not immune to crank ideas and belief in such ideas will persist to some degree even among Nobelists. It also makes for a convenient argument from authority for lesser cranks, because if a Nobel Prize-winning scientist says it, it must be true!

As we know, we humans are susceptible to misconceptions, logical fallacies, and biases.

What if people who are exceptionally successful from an early age are biased into thinking that they're less fallible, at the exclusion of taking advice and/or criticism, while simultaneously their incredible success paralyzes other people from offering criticism?

To put that another way, what I'm calling the "Prodigy Effect" is a two-way cognitive bias wherein one gives their own innate abilities undue positive weight with regards to their early success in a domain (business, art, science, etc.) which at the same time makes others reluctant to offer criticism. This seems like a mix of the hot-hand fallacy, some kind of "beginner's luck" bias, the gambler's fallacy, with a dose of self-serving bias and the spiral of silence.

The hot-hand fallacy was made famous by the 1985 Cognitive Psychology paper by Gilovich, Vallone, and Tversky, "The hot hand in basketball: On the misperception of random sequences". Basically, this fallacy is one wherein someone who has had an early success at something believes they have a greater chance of success at future tasks.

One of the first things that came to mind about this idea was this chart about M. Night Shyamalan's moving ratings over time. Each successive movie is essentially rated more poorly than the last: 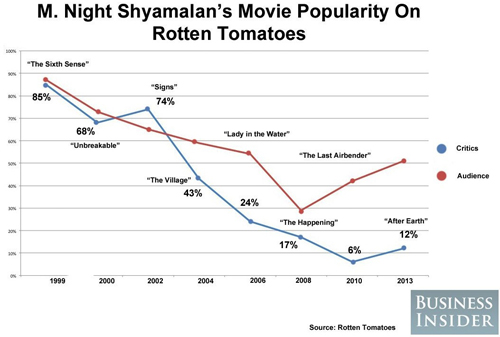 Or this review of Star Wars: The Phantom Menace (jump to 4:55) about people not calling out George Lucas on some bad ideas:

Both Shyamalan and Lucas had crazy successes with The Sixth Sense and Star Wars: A New Hope, respectively. But the subsequent movies that they directed were widely regarded as pretty awful.

But of course, these are anecdotes, and what counts is data.

Thankfully the Nobel Prize website has an API that provides these data, which I've cleaned and organized here. That file also includes the MATLAB script I used to analyze the data. For people with multiple Nobel prizes, I took their age at their first win.

What I found was that those 14 people who are classified as having the "Nobel Disease" were, on average, 8.4 years younger when they won their first Nobel Prize compared to "normal" Nobelists. 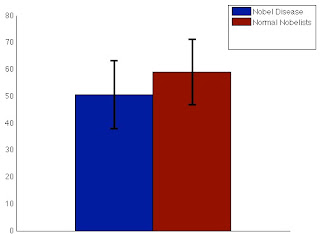 I'd love to do the same analysis on the ratings difference between a director's first film and subsequent films, with the idea that directors who have an early huge hit would then have more poorly-rated future films, but I don't have time to dig into the Rotten Tomatoes API.

This hypothesis could also be tested in an experimental psychology setup, though I don't quite have an idea for the experimental design yet.

Anyway, interesting stuff regardless, I think.