We the Kings bassist and YouTube celebrity Charles Trippy recently uploaded to YouTube a video of his brain surgery.

This is an amazingly powerful thing to watch and I recommend taking the time to do so if you have any interest in the brain and/or medicine that you watch it. It's... not an easy viewing though, so I warn you.


I came across this video on reddit, and I took a shot at explaining the procedure and details over there. Most of what I've learned is from my research (e.g., A, B, C) in working with neurosurgeons, neurologists, and the incredible patients who undergo these surgeries.

The full text of that discussion is below.

Okay I'm gonna take a whack at explaining what's going on here for people who are interested. Note that I'm not a medical doctor, but I'm pretty sure most of what I'm about to say is correct to a first approximation. I'll fix any errors as I or others spot them.

Why's he awake? Why are they asking him to move his hands? Stuff like that.

Before I explain anything though, can I just say how damn amazing this is? Like, let's all take a moment to step back and recognize that a person, who would have been much worse off otherwise, put his life in the hands of a few highly skilled people and some amazing technology and let them open his skull and remove something from his brain. I've seen this many, many times, but it's good to just remember how amazing of a time we live in even though we don't have flying cars or jet packs or whatever. Every day people's lives are saved by medical technology like this.

Also, Mr. Trippy's a pretty amazing guy for volunteering to share this with the world. I don't think people appreciate this stuff enough. Good on you man. I'd love to use this video when I teach.

On to the details. From this image here you can see that the tumor is in his right frontal lobe: 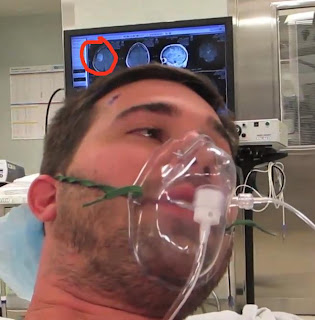 The image I've circled shows the tumor-related hyperintensity (bright whiteness) on a t2-weighted MRI, which allows you to differentiate tissues from fluids. In t2-weighted MRI, water is brighter. This particular kind of tumor makes the blood-brain barrier more permeable and therefore the region around it has more water and thus is brighter.

Note that I say the tumor is in the right half of his brain, but the tumor in the MRI image looks like it's in the left. That's because neurologists "flip" the MRIs so that left is right and vice versa. Supposedly it's mirrored because that what the doctor sees when they're looking at the patient.

Anyway, the fact that the tumor is in the back part of his right frontal lobe means that it's close to the parts of the brain that control the muscles in the left half of his body. That is, the right motor cortex part of your brain innervates the muscles on the left side of your body and vice versa.

The reason the doctors keep saying stuff like "critical to move right now" and "how’s your hand doing there?" is because they want to minimize the possibility of cutting healthy brain tissue in his motor cortex. Neurosurgeons have a specific term for parts of the brain dealing with movement, speech, vision, and sensation. They call these regions "eloquent cortex", and they're very worried about damaging them... otherwise people could end up paralyzed, blind, or unable to speak or understand speech.

So they're really watching him very carefully, and that's why he's awake. They're making sure he's moving his hand just fine.

Given the location of the tumor, prior to his surgery they probably did what's called a "wada test" to see if his language functions are localized to the left or right hemisphere of his brain. If he's right handed, as a male he's got a 99% or so probability of language functions being in his left hemisphere, but usually surgeons check to make absolutely sure (right-handed women are about 95% left-hemisphere language dominant). Functional brain imaging (EEG, fMRI, MEG) just isn't quite good enough on a single person for surgeons to really be 100% positive. Whereas the effects of the wada test are... well... pretty conclusive.

I've only half-jokingly asked my neurosurg friends to do this to me just to see what it feels like. Apparently "do no harm" and ethics and stuff, so no go so far.

Oh! Right at the beginning of the video a woman says "you'll feel a pinch and burn". I'm pretty sure she's doing a local anesthetic to the skin to numb it so they can screw the stereotactic frame into his skull. This lets them keep all of their instruments correctly positioned and still even though he's awake, talking, and moving around a little.

That's all I can think of for now. If anyone notices anything that I didn't address and they're curious about, ask me. If I don't know, I'll bug my neurosurg friends and update this post with answers.

What does it feel like to hold a human brain in your hands?

Heavier than I expected.

I feel like the answer should be that it was profound the first time. Enlightening. Humbling. But I just remember thinking how heavy it was.

Without preservation and chemical hardening you couldn't pick a brain up. Couldn't dissect it. But this process adds significant weight.

Over the years I've handled a lot of brains at a lot of events--from teaching neuroanatomy at UC Berkeley for three semesters to public speaking engagements--and my perspective has shifted.

I've watched a person lie awake while their brain is operated on.

I've seen a brain extracted from the skull and cut apart to determine neuropathology. I've sat in a room having a chat with a neuropath colleague when a nurse came running in with a slice of tissue from a patient currently undergoing surgery. My colleague excused himself while he diagnosed their glioblastoma.

As with many people in neuroscience, I have a deeply personal first-hand knowledge of the vicissitudes of some neurons doing something wrong in a loved one's brain.

It's hard for me not to stand there, mass of tissue in hand, the somewhat sickening odor from the solution wafting up into my glomeruli, and get hit with the gravity of what's actually happening. The realization that in my hands I hold what just a few weeks before was a person's everything. Every petty jealousy. Every insecurity and fear. Every hope and joy and pleasure.

But I was taught gallows humor by the one with the noose around his neck, and I've grown to appreciate that. So though I may joke and speak lightly and do really goofy crap (like the zombie brain stuff), those are all part of my process.

For that reason, before launching into my lectures and jokes and interesting factoids, I always remind my students or the crowd of what they're actually seeing and touching.

My job is amazing, but there is an existential weight that is easily forgotten on a day-to-day basis, but whose shadow is always there.

So I guess not much has changed since I held that first human brain after all; they're still much heavier that I'd first imagined, but in a very different way.

(From my answer on Quora)
Written by Unknown at 09:24 No comments: Links to this post

First, what is "big data" other than literally just a lot of data. While it's more of a marketing term than anything, the implication of "big data" is usually that you have so much data that you can't analyze all of the data at once because the amount of memory (RAM) it would take to hold the data in memory to process and analyze it is greater than the amount of available memory.

Your goal is to figure out how which features are most effective in getting college grads to click ads. Maybe your first-pass model on a random sample of 1,000,000 users finds that ads with people in them that are 200x200 pixels big and about food get the most clicks. Now you have a "prediction model" for what college grads want, and you can then test that to see how well your prediction (based on the 1,000,000 college grads) holds up when you compare it to the other 199,000,000 college grads.

Now, for what it can do in "daily life", well, pretty much any company with a significant tech group (Google, Twitter, Facebook, any bank or financial institution, any communications and mobile service, energy, etc.) are doing this kind of thing. To serve ads, to improve their services, to predict future growth and demand needs, whatever. 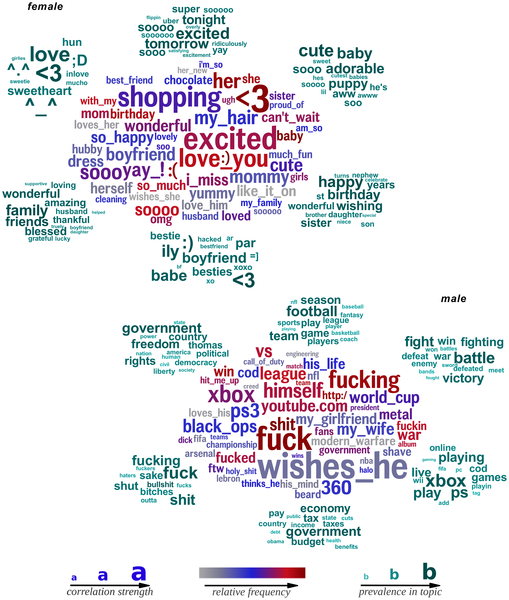 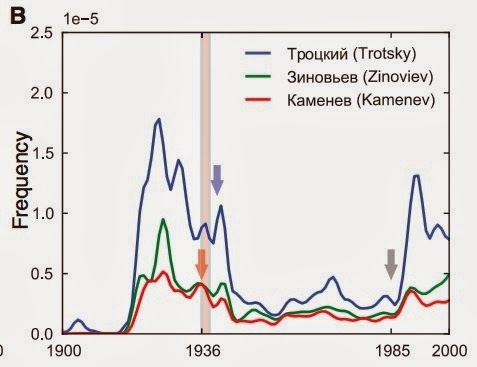 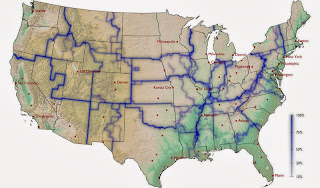 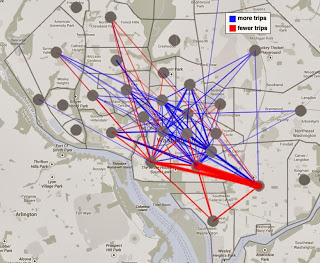 (This was originally a question on Quora.)