Laziness and being an Academic Batman

Batman sucks compared to the rest of the Justice League: Superman could vaporize him before he could even think to pull out his anti-Superman spray; the Flash could pummel him at light speed; Wonder Woman could Lasso of Truth him. But Batman's gone toe-to-toe with each of them and won many times. 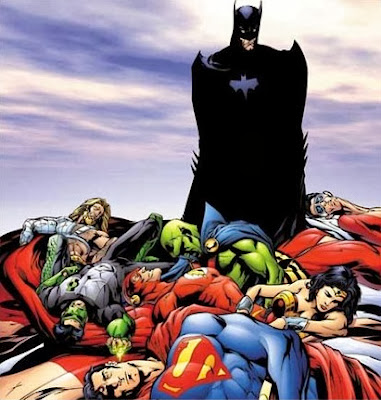 (Seriously if you haven't read Tower of Babel, stop reading my drivel right now and go do so.)

Other than the fact that it's all made up, how can this happen?

Batman's strength is in his planning. He thinks ahead and prepares for every contingency, no matter how small. There's a very important lesson here. It's okay if you're not the smartest, fastest, or strongest as long as you're mindful of your limitations and can admit your own weaknesses. To own them.

When I give academic talks, I've got 20-30 extra slides tacked onto the end that contain data and results from several side experiments. Not only is it thorough, but it shows you've thought hard about the problems you're addressing. It's amazing the kinds of reactions you get from the crowd when someone asks a pointed scientific question and you can say, "well according to this followup experiment we found that..."

It's no secret that I was a really poor undergraduate student. I only vaguely knew what I wanted to do and I couldn't admit that I didn't love where I was at the time.

I hated busy work. I hated the social pressure to be seen doing something as opposed to actually doing something. That's what I felt like college was.

After I graduated my two roommates and I spent most of that first post-college summer locked away in a bedroom playing video games until sunrise. All day, every day. We moved all of our desks into one bedroom so we could sit side-by-side-by-side and play Counterstrike and Team Fortress, Civ III, Starcraft, and whatever else grabbed our attention. This gaming marathon was punctuated by me heading out to party on the weekends.

My girlfriend of 4 months at the time (and now, by some stroke of luck I'll never fathom, my wife) would stop by the apartment on her way to work in the morning to say hello. We'd all still be sleeping, of course, because we'd just gone to bed after another marathon night of gaming.

From the outside this must have looked like incredible laziness. But it was largely apathy and paralysis induced by the unknown. I just didn't know how to get a job, how to be a scientist, or how to change my situation.

Since those days I've caught a lot of lucky breaks to help me get to where I am today.

But a big part of what helped my early scientific career was my laziness. Or rather, my disdain of busy work.

I'm a fan of "constructive laziness" and being too lazy to fail. That is, I try to take the time to think though the entirety of a problem before trying to attack it. This can take you a long way (though it can also hinder you if you're not careful...)

Laziness is undervalued and "putting in your hours" is overvalued.

Wait, that's not quite right... maybe a better way for me to say that is: the power of constructive, focused laziness is undervalued and people put an unwarranted emphasis on "being seen at work". Think back to the story about Gauss's algorithm for summing the first 100 digits. It was busy work and he solved it by being smart (and possibly a smart ass), not by just chugging through it like everyone else.

I recognize that what I'm about to say comes from the perspective of a certain kind of privilege, but I've worked manual labor jobs and there is something to be said for a career that you can leave at work. Science isn't like that. There's a cost associated with it. When I was driving a forklift and working the loading dock, I sure as hell didn't lay in bed at night wondering how to do it better. But now I spend a lot of my time "on" and thinking about my research. I have to make time to turn off.

But that's a cost I accept because working the loading dock wasn't what I wanted to be doing forever.

Without my deep, internal drive to want to socialize, hang out, shoot the shit, and do nothing, I wouldn't be where I am today. I value spending time with my wife, son, and friends, and I value a career that allows me to do that.

"Being privileged to work hard for long hours at something you think is worth doing is the best kind of play." - Robert Heinlein, Lazarus Long, Time Enough for Love
Written by Unknown at 15:01