The first email I ever sent was to Stephen Hawking. I sent the email in the spring of 1998 when I was 16 years old from a computer at my high school (because I didn't have internet at home) using a friend's AOL account. I had just finished reading Hawking's A Brief History of Time and knew that I wanted to be an astrophysicist (or a cosmologist). I emailed Hawking to tell him how much of an inspiration he was to me and how passionate I was about physics.

Passion. Follow your passion. For those of us lucky to have choices in our life trajectory we're bombarded by advice to follow our passions. Chase your dreams. Go to culinary school. Major in whatever you love. Drop out and start a company! Listen to no one, just follow your heart!

A quick look over at Amazon suggests this is a lucrative bit of advice.

But (and I'm definitely not the first to say this) it's not the best advice.

When I was in high school I was a physics and math chauvinist. I saw psychology and the biological sciences as "soft". My love for physics was probably planted in part by this goofy book: 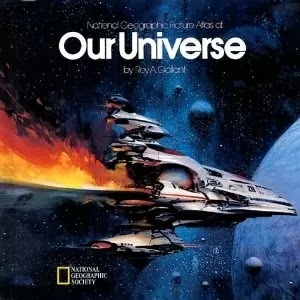 I've always been inclined toward the sciences, but that book lit a fire in me. It got my imagination going about what could be possible if enough smart people got together to work on a Big Idea. This creative aspect of science really drew me in and, I've come to realize, shaped my career.

Whenever anyone asked 10-year-old me what he wanted to be when he grew up, I'd answer "an astrophysicist". Yeah, I wasn't the coolest kid. But that spark stayed with me and I found some fun outlets. I spent a lot of time in high school playing video games, role playing games with friends, etc. All of the nerd-flavored creative outlets.

As for school, it was was easy and I coasted through.

Home life was… non-standard… so when I was given the opportunity to skip my senior year of high school to attend the University of Southern California I seized it. One late August night in 1998, at about 2 am, I called up my buddy Curtis and he drove me to Los Angeles to drop me off at college.

I immediately declared as a physics major and kept going with all the "advanced" versions of the courses. Around the same time I discovered that I enjoyed socializing and I made a lot of new friends. One part of my life was rewarding, the other was not, so I stopped going to classes. I did poorly, but I had a lot of fun doing it. My love for physics started waning due to the monotony of the work and the lack of wonder exhibited by the professionals I saw working in academic physics.

The only reason I didn't drop physics sooner was the fear that my physics friends would make fun of me for "going soft". And because I didn't know what else to do.

Becoming a astrophysicist was this grand ideal I'd built up for myself. It had become part of my identity. Once you start defining yourself by one thing—a political belief, religious affiliation, career, family, whatever—you lose identity to that thing. You reduce the number of paths to happiness and success and wrap your entire self around it.

To put it mildly: that can be unhealthy.

Obsessive passion (OP), by contrast, results from a controlled internalization of the activity into one’s identity. Such an internalization originates from intrapersonal and/or interpersonal pressure either because certain contingencies are attached to the activity such as feelings of social acceptance or self-esteem, or because the sense of excitement derived from activity engagement becomes uncontrollable. Thus, although individuals like the activity, they feel compelled to engage in it because of these internal contingencies that come to control them. They cannot help but to engage in the passionate activity. The passion must run its course as it controls the person. Because activity engagement is out of the person’s control, it eventually takes disproportionate space in the person’s identity and causes conflict with other activities in the person’s life.

I hate to go all "Medical students' disease" here but this really seems to capture the gist of my personal physics passion struggle. Breaking out of that was very hard for me. It really felt like I was abandoning my identity. Or like I was lying to myself about who I am.

During my sophomore year I lived in a crazy place. One of my friends wanted to take a psych class and, because I had a free slot in my schedule and I had no idea what to do, I took that class with him. The classes I did attend were pretty cool. Dammit if it didn't turn out that people, and not just particles, are fascinating, too!

Fast forward one semester: I go to register for classes my junior year and find out that my grades had been too low for too long and I was basically kicked out of school. Long story short: I plead and begged, got a one-semester reprieve, got my shit together, and became a psychology major. I finished all the required courses in a semester.

I devoured the stuff.

At the time USC only had a cell/molecular biology major. No cognitive neuroscience. So I basically made my own major (though my final degree was in Psychology). I took C++ and Java classes, AI, Philosophy of Mind, Communication, etc.

I volunteered in a research lab as an RA and discovered that my ability to write code was a semi-magical skill because I could automate a lot of laborious manual jobs. I learned that I had a "knack" for approaching problems that way.

Really my interests as a doe-eyed wannabe cosmologist kid aren't that different from my doe-eyed adult neuroscientist self. My weird childhood, party-fueled and tumultuous college years, and crazy friends made me odd but kept me optimistic and protected me from being jaded. Ironically I now use a ton of math and physics in my neuroscience work.

Ask yourself if you are harmoniously passionate, or obsessively, and if the answer is the latter, remember you are not your job, your belief, your class, your color, or your passion. To paraphrase a dear friend of mine: don't follow your passions, follow your competencies, and you might just find you enjoy doing something you're good at.